The fast-paced, slapstick-style comedy set in 1950s America follows the story of an ex-convict and his friends hatching a plan to steal a priceless diamond under the guard of the Minneapolis City Bank. Kick-starting the opening night at the Criterion Theatre back in 2016, the notable production has grown to be a raving success, hailed to be funniest show in the West End. Composed by Henry Lewis, Jonathan Sayer and Henry Shields of Mischief Theatre, the comedy caper is making its way around the UK and Ireland and will be pitching up in Leeds Grand Theatre 22nd – 27th October with further tour dates to be announced soon.

Just like its multi-award-winning comedy The Play That Goes Wrong, the production is littered with huge stunts and an incredibly high gag rate, intertwined with some Marx Brothers patter. Persisting down the comedy route, co-writer and Mischief Theatre Company Director Jonathan Sayer believes that the success of the productions in the present day is purely down to the style of comedy adopted as it helps people escape through laughter: “I think people need to laugh a lot at the moment. It’s not political, it’s not about anything other than being as funny as you possibly can be, minute by minute, and making people laugh”. Considering that the comedy style delivered is not specific to any particular country or place, the production can therefore easily be enjoyed across all cultures: “There’s just a huge amount of jokes and a company that are very happy to be laughed at rather than making witticisms, and that’s very relatable. There are always characters that you can quickly identify, fall in love and go on a journey with”.

The Top Wellbeing Experts in Leeds

What’s On This December?

The inspiration behind the comedy style for Jonathan personally was heavily influenced by the old silent movies of Charlie Chaplin, Laurel and Hardy and Buster Keaton. However, the main muse for all three writers is said to be their teachers at LAMDA and Michael Green, who wrote The Art of Coarse Acting. From this, the intended style for The Comedy About  A Bank Robbery was physical slapstick containing traditional English humour, similar to Fawlty Towers, but incorporating an anarchic twist.

“I co-write with Henry Shields and Henry Lewis. And then the way we work is that we develop all the scripts with the core creative team, so we’ll write a script and get it on its feet with the guys and workshop it and they’ll critique it and add to it. And then you bring in creatives, designers, directors and others and it snowballs under the wonderful auspices of our producers.”

Hinting that a new exciting project is in the pipeline, Jonathan keeps his cards close to his chest and refuses to spill the beans. He does however, say that his future endeavours with Mischief Theatre will continue making people laugh: “Maybe some more sequential work but also some totally new ideas. We’re really keen to work in TV and hopefully that will be in the not too distant future. But really, we just want to stay together, make people laugh, and have fun”. 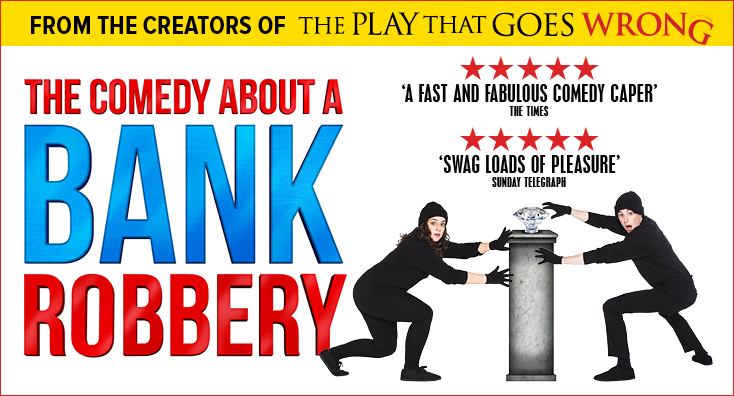