In Tel Aviv for Yom Ha’atzmaut or Eurovision? JLife picks the highlights of Israel’s White City.

Tel Aviv is one of the most vibrant cities in the world. A 24-hour city, it combines sandy beaches with a world-class nightlife, a buzzing cultural scene, incredible food, UNESCO recognised architecture and an international outlook.

The world’s eyes will be on Tel Aviv as the non-stop city will host the biggest song competition in the world, The Eurovision Song Contest on 14th May. Last year’s competition, hosted in Lisbon saw Netta Barzilai crowned the winner with ‘Toy’ and bringing the competition to Israel. It is the first time ever that Tel Aviv is hosting the show, which last year attracted 186 million viewers.

Tel Aviv is Israel’s financial and cultural centre and an international hub of art and creativity. It is a city that claims to celebrate pluralism and tolerance, thus aligning itself with the principals the music competition that began in 1956. Taking place at Tel Aviv Expo, the city city’s main convention centre, around 9-10,000 spectators are expected to attend the final, while the world’s largest Eurovision village will be in place on the Tel Aviv boardwalk at Charles Clore Park. Here, Eurovish fans will be able to enjoy live performances by artists, DJs and watch the semi-finals and finals broadcasted from the arena.

A ‘White City’ highlight is its architecture, boasting a renowned collection of Bauhaus style buildings and is recognised by UNESCO in 2003 as a result. The buildings were designed by Jewish architects who had studied at the Bauhaus School in Germany and escaped Europe following the rise of the Nazi regime. Creating a new architectural language characterised by its functionality and cubic simplicity, typical features include white walls, flat roofs, facades with airways and shading ledges.

It is possible to see the highlights of Tel Aviv in just one day, but many people choose to spend at a few days there to fully explore, so here are JLife’s top picks for uncovering Tel Aviv… 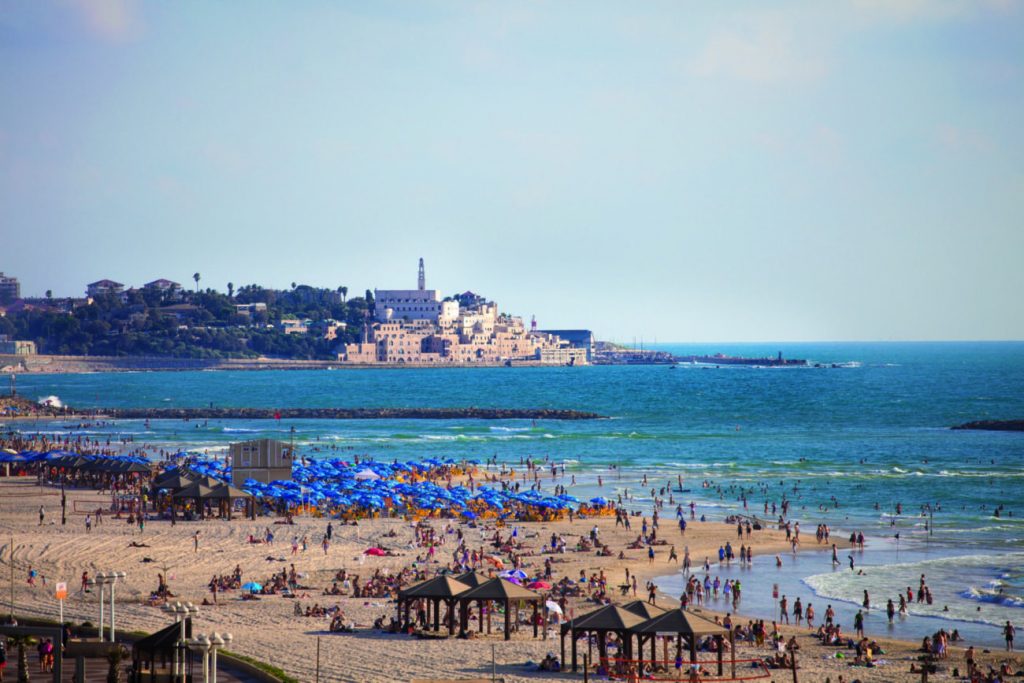 Let’s start with the coastline. Tel Aviv boasts a stunning seashore that makes up its western edge. People walk or jog, cycle, sit leisurely on benches and fill their lungs with fresh air, while surrounded by the blue horizons. Dozens of restaurants, cafes and ice cream parlours are busy all day long, while bars and clubs blossom after dark. Right off the promenade you’ll find clean sand, lounge chairs, ice cream vendors and diehard beach-lovers. Each beach enjoys unique characteristics and offers a variety of services, including lifeguard stations, kiosks, restaurants, children’s playgrounds and outdoors gyms.

Further along, the port of Tel Aviv in the north west of the city, known as Ha’Namal, was built in 1938. The wide wooden promenade attracts thousands of people seeking to combine food, shopping and entertainment with beautiful sunsets and salty sea breezes, and when the sun goes down, the bustle only increases as the port transforms into one of the liveliest areas in the city.

Far more historic is Jaffa, containing the old port and first mentioned in the Old Testament as the port from which the prophet Jonah embarked on a ship before being swallowed by a fish. In modern times, the port served as the main export and import hub of the region, including for the famous Jaffa oranges. Today, local fisherman still use the harbour and the main hangars of the port have been restored to include art galleries, cafés, restaurants, various shops, and the Nalaga’at Center – a unique artistic complex operated by the deaf and blind community.

Launching in time for Israel’s 70th anniversary last year, a 10-stop walking route tells the story of Tel Aviv’s foundation and is a perfect opportunity to experience the birth of Israel while in the city.

Though Tel Aviv is known around the world for its technology start-ups, restaurants and night haunts and architecture, its history is often overlooked. The 1km Independence Trail takes visitors past 10 heritage sites connected by a golden path that snakes through the streets. A joint project by the Tel Aviv-Yafo Municipality, the Ministry of Tourism and the Ministry of Jerusalem and Heritage, it was inspired by the Freedom Trail in Boston in the US, which takes visitors through the history of the American Revolution.

The Independence Trail uses a mobile app to educate visitors about each of Tel Aviv’s heritage sites. At each of the 10 stops, information about the location will appear on the visitor’s device, explaining its historical context and background. Visitors can also guide themselves along the trail using a map available in eight languages.

The trail begins at the intersection of tree-lined Rothschild Boulevard and Herzl Street, home to Tel Aviv’s first kiosk. Established in 1910, the location quickly became a central meeting place for locals. Further stops include the home of Akiva Aryeh Weiss, founder of the city’s first neighbourhood which later evolved into modern day Tel Aviv, the site where the first Hebrew-speaking high school once stood and the Great Synagogue on Allenby Street. The trail then heads to the Tel Aviv Founders Monument dedicated to the men and women who established Tel Aviv in the first half of the 19th century, before finishing ends at Independence Hall, where on 14th May 1948, David Ben-Gurion read aloud the Declaration of Independence. 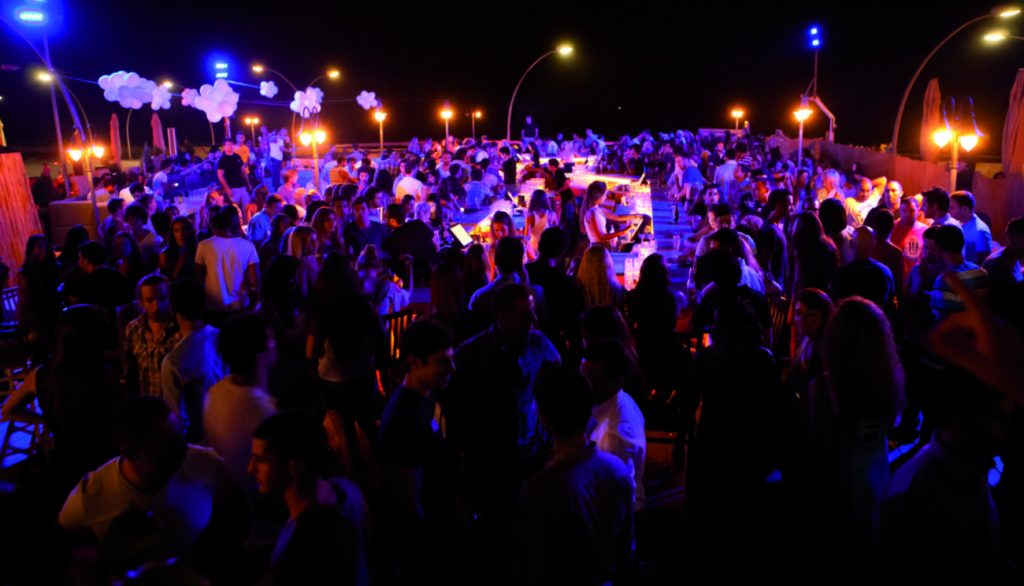 Need to stock up on souvenirs or gifts? Not to worry, Tel Aviv isn’t short of places to sample the homemade and artisanal wares of Israeli life and creativity. The Carmel Market, or Shuk Ha’Carmel, is the city’s biggest marketplace and a fascinating place to visit. Essentially a long and narrow alley with colourful stalls lining its sides, vendors proudly present almost anything imaginable, from different kinds of bread and pastries to tasty olives, dried fruits, exotic spices and fresh produce.

Adjacent to Carmel Market is the artists’ market. Situated in one of Tel Aviv’s oldest neighbourhoods and known as Nachlat Binyamin, it has a vast and varied selection of handmade goods ranging from jewellery, ceramics, special toys, lampshades and Judaica. Open Tuesday and Fridays from 10am until sundown, market day in Tel Aviv is always a special time of the week. 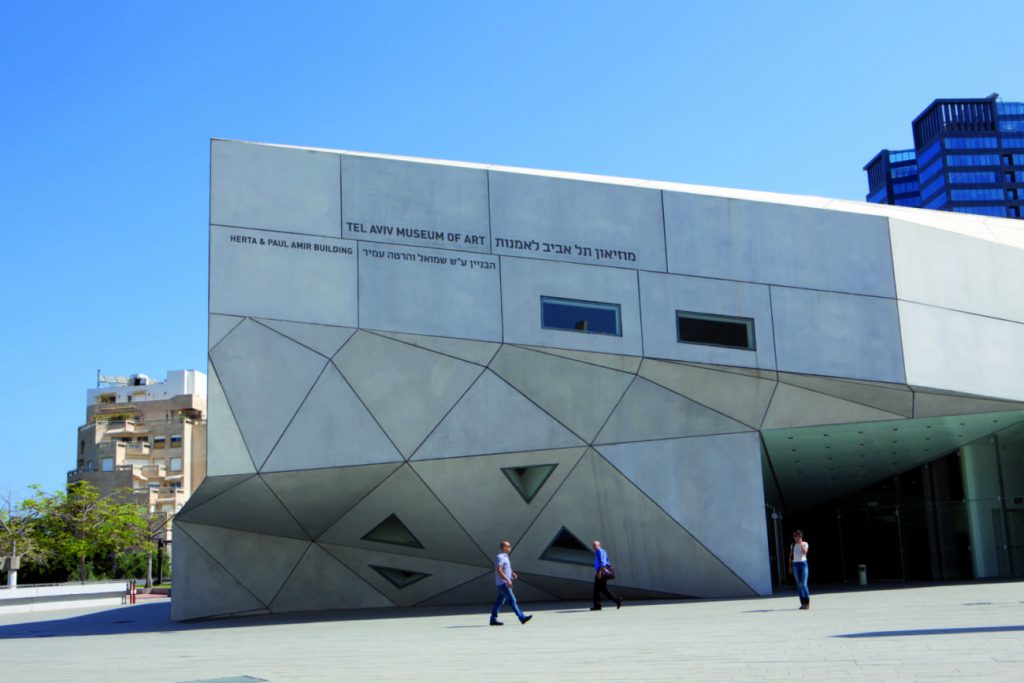 Culture Squared
The new Culture Square, designed by artist Dani Karavan, is at the end of Rothschild Boulevard and is central to three of the city’s most important cultural institutions: the recently renovated and expanded national theatre for Israel, the historic Mann Auditorium; and the Helena Rubinstein Pavilion housing contemporary art exhibitions and is open for free to the public.

Acting as the city’s gateway to culture, the designed gardens and surrounding cafes and eateries are also popular haunts for locals and tourists who wish to relax and soak up the sun in auspicious surroundings.

Habima Theater is Israel’s national theatre and was rebuilt and reopened in 2009. While almost all productions at Habima Theater are in Hebrew, many are translated simultaneously into English, making it very possible for tourists to enjoy the performances. The Mann Auditorium, or Heichal HaTarbut, is the largest concert hall in Tel Aviv and is home to the Israel Philharmonic Orchestra (IPO). Established over 80 years ago, each season IPO hosts top conductors and soloists from around the world and helps to develop Israeli artists and young talents from both home and abroad. The Tel Aviv Museum of Art, which incorporates the Helena Rubinstein Pavilion for Contemporary Art also situated within Culture Square, recently hosted the 2019 Eurovision semi-final allocation draw.

Beautifully tranquil on the outskirts is HaYarkon Park is to Tel Aviv, what Central Park is to New York. HaYarkon Park is the green lung of Tel Aviv and straddles the Yarkon River in the north of the city. Aside from the beauty and tranquillity of the neatly groomed lawns, it is also a popular site to host some of the biggest musical acts in the world over the years including Michael Jackson, Bob Dylan, Paul McCartney, The Rolling Stones, Madonna, David Bowie, Elton John, Aerosmith, Metallica, U2, Depeche Mode, Guns N’ Roses, Red Hot Chili Peppers, Justin Timberlake, Rihanna, Lady Gaga, Justin Bieber, Rod Stewart, Queen + Adam Lambert and Britney Spears, and Bon Jovi will be rocking Israel this summer in July.

There’s never a better time to visit a city than when Eurovision comes to town. With great weather virtually all year round, dazzling golden beaches, colourful markets, cutting-edge culture and outstanding nightlife all in one relatively compact city, Tel Aviv is Israel’s most outward and contemporary destination for all ages.

EL AL’s new Manchester to Tel Aviv route is scheduled to start on the 26th May, with three weekly flights on Mondays, Tuesdays and Thursdays. To find out more, visit Elal.com.