First mentioned in the Doomsday book and known to many as the home of Leeds Rhinos, Yorkshire Carnegie and Yorkshire cricket, Headingley is probably one of the most famous of Leeds’ suburbs.

Being such a draw for locals and tourists alike, it’s no surprise that the area has plenty to offer for eating out, shopping or for things to do. Pay a visit to the world famous Headingley Stadium sporting arena. Yorkshire CCC is the most successful team in English cricket and you can learn more about the club at the Yorkshire Cricket Museum which opened in 2011 in the East Stand and is a must-see for cricket fans, while the event facilities are ideal for Bar and Bat Mitzvahs.

Harrogate: So Near So Spa

If indoor pursuits are more your bag, why not catch a film at Cottage Road Cinema, one of the oldest cinemas in the UK. They’ve been entertaining all ages with films since 1912 but, don’t worry, the technology has been updated since then. Screenings are usually twice a day, with recent films Isle of Dogs and The Leisure Seeker planned for the month of June, plus live broadcasts of the Oscar Wilde play An Ideal Husband and The Royal Ballet’s Swan Lake direct from the West End.

From the outside, The Bowery on Otley Road looks like just another coffee shop, but it is actually a showcase for artists and designer-makers. The gallery does have a coffee shop though, selling Allpress coffee and freshly made salads and sandwiches. The gallery also hosts short courses and workshops featuring opportunities to learn and hone skills such as sewing, drawing, jewellery making and painting. Headingley Enterprise and Arts Centre (HEART), funnily enough, right in the heart of Headingley on Bennett Road is the cultural and community epicentre for the area and is home to a number of events including concerts, creative workshops and film screenings. Events in June include a regular live music night welcoming local acts The Alasdair Pennington Trio, Folly and Lost Loui and a social that features vinyl, live music and Italian street food courtesy of nearby Italian restaurant, Salvos.

With a reputation for being a student area, Headingley is proud of its abundance of eateries, pubs and bars, but away from the obvious Otley Run haunts of old, there are plenty more places to discover away from the occasional crowds. Voujon, part of the Ascot Grange Hotel on Otley Road, has recently opened, unveiling a new modern Indian restaurant with a diverse menu serving both traditional classics and contemporary dishes. Sebby’s Café & Deli in Far Headingley opened in 2011 and has quickly become a popular place for locals who want to grab a quick lunch or try the café’s homemade cakes and baked goods. Owners Helen and Robert are a friendly bunch and the cafe often work in conjunction with St Gemma’s Hospice in Moortown on charity initiatives. Situated on Weetwood Lane is Bare Coffee, a little bijou independent cafe serving coffee and tasty bites for breakfast and lunch using the finest ingredients, including goods from North Star Coffee, Leeds Bread Coop and fruit and vegetables from Organic North. Pop in for a cup of reasonably priced coffee or an indulgent treat. 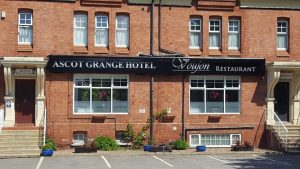 Further north is West Park, named after the green space containing playing fields and a conservation area of historic buildings. You may recall that the Moor Grange estate within the area was used as a location for 80s TV drama The Beiderbecke Affair set in Leeds. West Park Lounge, an unassuming café bar and bistro, is a hidden gem for international cuisine in a laid back atmosphere serving Italian favourites, pizzas and gourmet burgers cooked on a charcoal grill.

If you’re looking for somewhere to stay, then the brand new Premier Inn right on the main street of Headingley is ideal for a base, so too is Weetwood Hall Estate, the 17th century manor house hotel on the edge of the suburb. It offers modern and high quality facilities in a site steeped with a fascinating history, set within nine acres of woodlands and gardens. For extensive health club facilities including a large a swimming pool and gym, six treatment rooms and a packed programme of classes, you can’t go wrong with Village Hotel Leeds North. An ideal spot for an overnight stay or to kick start a fitness regime.

Headingley is an independent hub that continues to thrive on its own unique terms, with visitors and residents alike making the area what it is today. Residents have even set up one of the UK’s first local investment funds to be invested in a range of local projects and community initiatives, having already reached three-quarters of its £480,000 target at the time of going to print. Whether you are simply passing through to sample its foodie credentials or looking to make Headingley your home, you can be sure of a friendly welcome.

2018HeadingleyLeedsRestaurantVoujonWest Park
FacebookTwitterPinterestLinkedInTumblrRedditVKWhatsAppEmail
Reach for the Sky
We Need You!
Related posts
Features-Leeds