Chapel Allerton’s food, music and art scenes continue to thrive. JLife takes a look at what to expect next from the popular suburb.

It has been another year of change for Chapel Allerton, as the bustling inner Leeds suburb continues to grow and attract new business. The coming months look set to offer more of the same, with a frenzy of developments that should delight foodies across North Leeds and beyond.

Adding to the village’s already eclectic selection of restaurants and eateries is the arrival of Buca di Pizza. With a branch established in Leeds city centre, the pizzeria is set to unveil its suburban sister site in spring. As well as offering a range of authentic pizzas, Buca offers its own creative twists on a traditional slice with Goan coconut curry sauce, paneer and onion bhajis among potential topping options. Just in time for spring and summer nights, there will be an outdoor seating area at the pizza restaurant to add to Chapel Allerton’s almost Parisian pavement cafe culture. Plans are also reportedly in the pipeline for bar and restaurant The Woods to add a rooftop terrace with a balcony to its roster – meaning there could soon be more scenic spots for a tipple.

There are a handful of upcoming anniversaries to be honoured too, as long-time local favourite Sukhothai Chapel Allerton celebrates 15 years of plating up South East Asian fare for North Leeds foodies. Look out for JLife’s regular featured recipe from the Thai food institution. 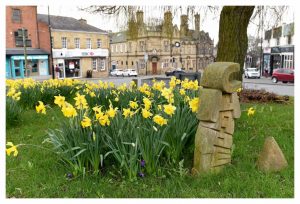 Turning to art and music, the village is also set to blow out the candles on Chapel Allerton Arts Festival’s 20th birthday. The festival, which provides a platform for local musicians and businesses, usually takes place the week and weekend following August bank holiday. There is plenty for culture vultures to get their teeth into before that, however, as creative space Seven Arts turns 10 on 7th July. For almost a decade, the venue has been entertaining the Chapel Allerton masses with regular live music, art and cinema, as well as feeding the hungry hordes in its cafe and bar area. To help it mark a decade since its opening, a spokesperson from Seven Arts told JLife: “The weekend beginning 7th July will be devoted to celebrating our range of arts activities from spoken word to dance, cabaret, jazz, blues and theatre. We have also scheduled a special art exhibition from local artist Gill Boulton, who has a whole years’ worth of ‘Seven’ to display.”

The arts centre Inkwell Arts, a project run by mental health charity Mind Leeds, is also hosting several notable events across the next few months. There will be a Spring Fair in April, followed by the return of the popular Midsummer Festival later in the year, which will feature a craft fair during the day and live music in the evening.

In news that will interest shoppers and bargain hunters, the building of a long-proposed new Aldi supermarket on Harrogate Road on the old Yorkshire Bank site is due to be underway by summer, with the demolition of the old structure already in progress.

With such a diverse and complimentary combination of major chain and quirky independent eateries, bars and entertainment establishments, Chapel Allerton continues to prove it has something to offer any palate. And, with so many birthdays approaching, let’s hope the suburb has plenty more milestones to come.