The Harewood Speed Hillclimb season is in full throttle, as drivers compete against the clock on the 1,440m tarmac run between Harewood village and Collingham – the longest of its kind in the UK. With cars reaching breakneck speeds of 130mph, it’s well worth heading over to East Keswick for unrivalled views of highspeed motorsport action set against a backdrop of the stunning Wharfedale valley.

The Montague Burton Trophy Hillclimb takes place on 4th August, while the Summer Championship Hillclimb returns on 25th August, with children under 14 able to spectate for free. If the high-octane action inspires you to get behind the wheel, The Harewood Academy has recently started offering budding racers the chance to experience the thrill of the hill for themselves.

Motorsport enthusiasts are in luck, as the Harewood House grounds are set to welcome another fun-filled summer of car displays and entertainment. Rolls Royce, North of England Rally brings together some of the UK’s most prized motor cars to the North Lawn on 4th August, while The VW Festival is back for a weekend of retro Beetles and camper vans on 10th August.

Cinephiles will be delighted to hear that open-air cinema returns to Harewood from 6-8th September, as The Luna Cinema presents three nights of classic flicks under the stars with blockbusters Mamma Mia: Here We Go Again, A Star is Born and Bohemian Rhapsody. For younger film lovers, the Luna Kids Open Air Cinema season runs between 21-25th August, with a range of films from golden oldies through to this year’s hits taking to the big screen each day including Harry Potter and the Philosopher’s Stone, The Incredibles 2, Finding Dory, The Lego Movie 2 and Aladdin.

Love it or Leave it

Over the summer, the Walled Garden has been transformed into an interactive ‘listening’ space inspired by the music of the blind 17th century Dutch musician, Jacob van Eyck. The Pleasure Garden combines excerpts from Eyck’s catalogue, set to newly commissioned works by Australian musician Genevieve Lacey, who has previously performed for HM The Queen in Westminster Abbey and as a soloist at BBC Proms. Over 30 connected audio devices have been hidden in trees and plants, programmed to respond to movement, creating a space of musical play as visitors explore the garden.

We ‘Hared’ it on the Grapevine…

Harewood House is already renowned for standing in for Buckingham Palace in ITV period drama Victoria, but rumour has it, the 18th century country house will make an appearance in the upcoming Downtown Abbey film, released in cinemas this September. The fictional Lord and Lady Grantham played by Hugh Bonneville and Elizabeth McGovern, were recently spotted in evening dress during the filming of a party scene, while Laura Carmichael and Penelope Wilton, who play Lady Edith and Isobel Crawley, were also pictured on the set alongside period cars parked in the grounds. 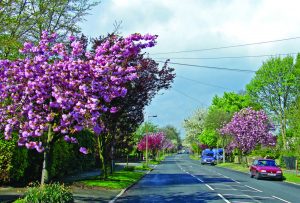 Closer to home is one of the musical highlights of the summer, Leeds International Concert Season, bringing free live music to the green spaces of Leeds. On 18th August, local klezmer outfit Kibitz comes to Alwoodley Village Green in an al fresco performance that gives the movers and shakers of LS17 the chance to dig out their picnic baskets and boogie in the sunshine. The seven-piece instrumental band performs energetic Eastern European folk, tinged with gypsy jazz and driven by infectious Balkan beats.

Golfers in LS17 are always spoilt for choice, with no less than seven courses in a three-mile radius. History was made this summer at Alwoodley Golf Club, as the heathland course set high atop Wigton Moor, hosted the coveted English amateur stroke play championship, known as the Brabazon Trophy for the first time. The winner, Rotherham’s Ben Schmidt, became the world’s youngest-ever champion at just 16 years of age.

Still with golf, the club that rose to international fame as the host of the first Ryder Cup on British soil, Moortown Golf Club has consistently ranked in the UK’s top 50 courses. Over the past century the course has played host to a range of big tournaments with famous winners including Sir Nick Faldo, Bernard Gallagher and Sir Michael Bonallack. From 4-7th September, the Yorkshire Challenge will grace the fairways, alongside Yorkshire’s two other Ryder Cup venues Ganton and Lindrick, in a competition which last year saw £10,000 in prize money up for grabs.

Away from the greens and a seven-figure funding package has helped business partners James Taylor and Mike Goldstone found a new 2,500 sq ft dental facility on Harrogate Road opposite the Corner House Café. The venture includes a private dental practice, as well as a dedicated in-house laboratory and specialist fabrication facilities, offering patients a same-day service for 3D printed crowns. The launch of The Dentist will create more than 15 jobs across a range of roles, from dentists, manufacturing technicians to receptionists over the coming months.

Donisthorpe Hall’s Trudi Moss Suite is becoming a popular venue for the some of the community’s biggest events, and on 15th September, Donisthorpe Ladies Fundraising Committee is hosting a barbeque with entertainment from Howard Lee, Susan Wilcox and Stanley Glucksman all in name of raising vital funds for the Jewish residential and nursing home.

Leeds Jewish Welfare Board (LJWB) has been a stalwart of the community since 1878, when it began life as The Board of Guardians, occupying offices adjoining Leeds’ oldest synagogue, Old Hebrew Congregation on Belgrave Street. Now in its newest incarnation as the Marjorie and Arnold Ziff Community Centre on Stonegate Road, it invites the community to take part in its diverse programme of activities throughout the year, including Pilates classes, cookery courses and inclusive sessions on its community allotment project. If you’re looking to entertain the kids over the long summer, LJWB’s TimeOut Summer Club is back for children aged five-11 years from 19-22th and 27th-29th August and is suitable for children with additional needs.