Lynne Coates takes a luxurious river cruise through Holland and Belgium for a ‘Tulip Serenade’.

As our chauffeur-driven BMW delivered us from Schiphol airport to the riverside docks in Amsterdam, it was apparent just how popular river cruising has become. Row upon row of gleaming vessels, moored side by side, bobbed harmoniously in the sunshine. We quickly spotted ours, the Amadeus Silver II.

Our ship – it is not a boat, as our captain explained – is one of the newest vessels in the Amadeus fleet. The stylishly contemporary staterooms have spacious walk-in wardrobes and a cleverly designed shower room with handy little shelves for stacking toiletries, plus effective mirror lighting (great for applying make-up!). Essential on a river cruise, floor-to-ceiling cabin windows, allow the passing scenic landscapes to become living wallpaper. 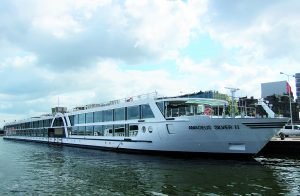 Breakfast, lunch and dinner, are served in the ship’s main dining room. For late risers, a light breakfast is available in the Panorama lounge, where an alternative buffet lunch and afternoon tea are also served. The variety and quality of food on board is superb and, as on most cruises, indulgently excessive. There is little in the way of evening entertainment, but after full days, lively conversations with fellow passengers over a delicious dinner and copious amounts of wine, most passengers are ready to head off to their comfortable beds. The delightfully friendly and hard-working crew keep the ship immaculately clean and running smoothly. 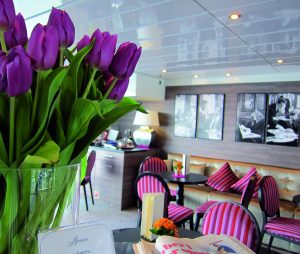 Copenhagen; The Capital of Cool

Day one had us tasting Gouda cheese in Volendam, learning how water levels in the Dutch Polder landscape are controlled by pumping, and wandering through picturesque old fishing villages. We heard that even in the town of Edam, the Dutch prefer Gouda and that cycling is a lifestyle, not just a mode of transport.

Our itinerary included a visit to Arnhem, site of the Second World War battle operation Market Garden, portrayed in the film A Bridge too Far. In 1944, the British 1st Airborne Division and the 1st (Polish) Independent Parachute Brigade were given the task of securing the strategic bridge at Arnhem. Hopelessly outnumbered by the Germans defending the bridge, both the British and Polish suffered terrible losses. We visited the Airborne Museum in Oosterbeck, where the main battles took place, a brilliantly constructed exhibition with original artefacts, film and photos. Afterwards, we visited the cemetery where most of the soldiers who lost their lives are buried. Rows of white headstones are testament to the futility of war, as young men of all faiths are laid to rest side by side. Together with some of our fellow Jewish passengers, we identified those marked with a Star of David and laid stones on them – an emotive experience. 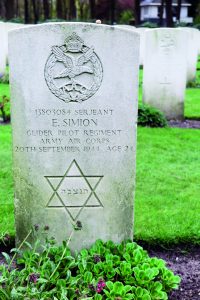 Cruising through the Netherlands, we entered the province of Zeeland, known for its beaches, water sports and the Delta Works, and moored up near the capital, Middelburg. The city’s distinctive architecture, historic monuments and vibrant shopping scene reflect its former glory as one of the major trading cities of the Dutch East India Company. While exploring the picturesque alleyways we discovered a small synagogue where, by chance, a group of Israeli tourists from another Amadeus ship, were visiting. We were able to listen in to a talk being given by one of the synagogue members and learned that Samuel Ben Israel, son of Menasseh Ben Israel – who negotiated with Oliver Cromwell for England and its colonies to accept Jews – is buried in Middleburg at the Sephardic burial site located outside the city wall. The synagogue, partially destroyed during the Second World War, was restored in 1994 and was the third to be built in the Netherlands during the Golden Age. In the hall of Middleburg railway station there is a plaque of remembrance for the Jews of Zeeland who started their journey to the death camps from there. Only a small number returned to the city and, today, there are around 250 families registered as members of the synagogue, though it is thought there are more Jews in the province.

Cruising on to Belgium, we visited the medieval cities of Gent and Bruges. Tempting aromas permeate the medieval cobbled streets of both cities, where varieties of chocolate shops abound – paradise for chocoholics! Gent, often referred to as the medieval Manhattan, is reputedly one of the most beautiful historic cities in Europe with its three grand mediaeval towers forming the unique skyline. Bruges, acknowledged as the ‘Venice of the North’, is a charming maze of winding, cobbled streets interspersed with romantic canals. Once inside the old city walls, the historic centre of Bruges is easy to navigate, and delightful to explore.

The two major cities on our itinerary were Antwerp and Brussels, where tours, taking in the main highlights, were on offer. Having previously visited Brussels we chose to explore Antwerp. Known as the ‘last shtetl in Europe’ it has one of the largest Ultra-Orthodox communities in the Diaspora. Most work and live near to the city’s Diamond district – jewellery shops abound. The Diamondland museum offers visitors the opportunity to see the specialist process of diamond cutting and preparing stones for jewellery, and the dazzling display for sale in the showroom is tantalisingly tempting! Also worth visiting in Antwerp is the Museum aan de Stroom (MAS) museum, a contemporary building with 10 floors of thought-provoking exhibitions and leading up to an open roof terrace with staggering panoramic views over the city. 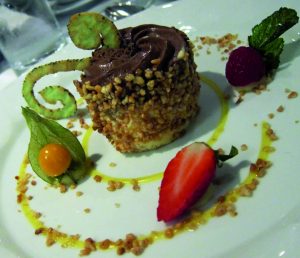 Of course, the Netherlands are renowned for their windmills and flowers. This cruise was all about both. Our last day on board included a visit to Kinderdijk, where 19 sturdy mills built in 1740, are now preserved as historical works and museums; and to the Keukenhof Flower Gardens. One of Europe’s largest garden displays, Keukenhof only opens to the public for eight weeks of the year. We were completely blown away by the vast, eye-wateringly beautiful gardens with their vibrant, multi-coloured, varieties of flowers. An afternoon simply wasn’t long enough to take it all in.

There is something deeply relaxing about river cruising. The pace is gentle and the changing landscapes on either side of the river with uninterrupted views allow for a teasing glimpse into inhabitants lifestyles. Certainly it is a delightful way to travel, and Amadeus Silver II ticks all the boxes required for a luxurious floating boutique hotel.

Details:
Amadeus River Cruises currently has a 15% early booking discount on 2018 departures including its seven-night Tulip Serenade cruises which start from just £1099pp which is a saving of over £300.

Price based on 5th April 2018 and includes return London flights (regional flights available on request), all non UK transfers, full board with free-flowing wine, beer and soft drinks with lunch and dinner. Kosher food is available. For further information contact Fred.\ on 0800 035 6411, sales@fredrivercruises.co.uk or visit Amadeus-rivercruises.co.uk.