JLife’s Evangeline Spachis travelled to Holmes Chapel and its neighbouring town Knutsford to experience The Vicarage Hotel and The Courthouse.

Holmes Chapel, a picturesque if sleepy town in Cheshire, near to the spectacular Jodrell Bank Observatory is made significant, depending on whom you ask, by being the hometown of former One Direction-er, Harry Styles. JLife was invited to sample the delights of The Vicarage Hotel in Holmes Chapel and its sister property, The Courthouse in nearby Knutsford. Sumptuous food and beautiful surroundings awaited.

Upon arrival into Holmes Chapel station, a lonely stop on a line that continues onwards to Crewe, as is often the case, it was a short but brisk (it was freezing after all!) walk to the village itself. Quiet and unassuming, there is a still a fantastic array of amenities and shops to entice walkers or passers-by, though this particularly overcast afternoon meant that only the occasional dog walker was around to nod to or follow into a local eatery. The activity mainly centres on a shopping precinct containing a supermarket, a fish and chip shop, pizzeria, bookmakers, estate agents, a chemist and a library, while the village itself is dispersed around the site of the 13th century St Luke’s Church and a modest First World War memorial. 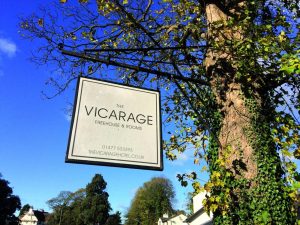 Taking in the Cheshire countryside and continuing on with our luggage in tow, we eventually came to our destination, The Vicarage Hotel. Immediate impressions were that the hotel is quite beautiful, and its origins as a 17th century Grade II listed country pub meant that the getaway is deceptively spacious but effortlessly cosy. The hotel immediately strikes a good balance between providing a ‘bed and breakfast’ style feel alongside boutique hotel amenities and touches.

As to be expected from a converted building, the layout is initially surprising, with another nook or cranny to relax in around every corner, each as cosy and tastefully decorated as the last. We located the reception, not before checking out the bar and restaurant briefly, and were greeted by the extremely friendly and helpful Natalie, who oversaw our stay.

As an idyllic weekend getaway from the hustle and bustle of everyday life, the hotel has recently launched six new stylish signature rooms to relax and unwind in following an afternoon of walks around the countryside. We were shown to one of these, and it really was a spectacle for the eyes. We were told that this room was usually selected as a bridal suite, and it’s easy to see why this spot is a popular romantic hideaway. With a spacious king size bed, painted furniture, exposed brick walls, a rainmaker shower and a roll-top bath big enough for two; it was a luxurious space with every corner curated immaculately. The artwork on the walls might not be everyone’s taste, they weren’t ours particularly, but they certainly carried through the ‘quirky’ stylings of the bar and restaurant downstairs.

Returning downstairs for dinner, the restaurant and bar was slowly filling up with fellow B&B-ers and visitors who were clearly drawn to the venue for the eatery alone. As one of the few bistros around, it definitely is a destination for inhabitants of the surrounding areas, and as we tucked into our meals it was immediately clear why it attracts an appreciative crowd nightly.

As we perused the menu and the daily specials, we treated ourselves to a cocktail. It’s a cardinal rule that if I see a bloody Mary on the menu then I have to sample it and I was thoroughly pleased that I did. My main was the sea bass, a succulent pan fried fillet accompanied by fondant potato, pea puree and tomato salsa, while my guest opted for one of the seasonal specials created by the chef that day. The extensive bar was also reflected in the wine list, and a bottle of the Patriarche pinot noir was a light and smooth choice to occupy our warming and beautifully prepared dishes. Dessert was eventually decided on, a caramelised banana parfait, chocolate, roasted pineapple, banana loaf and rum gel (“two spoons, please!”) and was slowly devoured. Full and thoroughly impressed with our evening meals and the attentive service, we shuffled to bed, wondering if a stair lift for satiated patrons would ruin the décor in a 17th century freehouse. 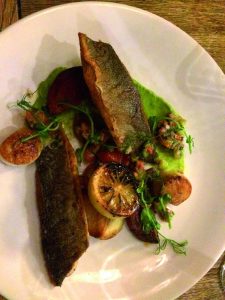 The next morning, breakfast in the airy conservatory was enough of a temptation to leave our deluxe bed and start the day. Crisp sunlight streamed into the breakfast room as we made our choice of a veggie breakfast and the Vicarage full English respectively. A continental breakfast bar of fresh fruit juices, seasonal fruits, natural yoghurt, cereal, pastries, toast and Tiptree preserves was also available for early risers who prefer a lighter treat.

The Vicarage is the type of place that if you chose to stay there all day and not venture out you’d have just as wonderful time, but alas as checkout time loomed, we packed our belongings, quite sad to leave. A day in nearby Knutsford was ahead, along with more than food we could shake a stick at (we didn’t try that FYI).

It was a short seven mile drive to Knutsford, a popular and affluent area. I was excited to stumble upon the Gaskell Memorial Tower which was dedicated to Elizabeth Gaskell, the prominent Victorian writer who based her creation of Cranford on the quaint town.

The history connection continued as we arrived at our venue for Sunday lunch. The town’s former crown court has been converted into The Courthouse, containing the Barristers Restaurant & Rooftop Gardens. The magnificent building has been refurbished to emulate the building’s history and grandeur-style, and it is the restaurant and bar which remains the star attraction while the rest of the courthouse is being converted into 50 luxury bedrooms. This year, 10 luxury bedrooms will be opened in the existing wings with a further 40 bedrooms introduced in 2019.

It’s hard to not be instantly impressed when entering this impressive building. Our mouths were agape at the beautiful and decorative glass domed ceiling and were amused at the tongue-in-cheek artwork on the former courthouse majestic walls – look out for the youthful mugshots of Frank Sinatra and Elvis Presley! Last year marked 65 years since war hero Alan Turing was tried at the former sessions court here, and though it’s nice to see the building used for a new purpose, I guess we would have liked to see a commemoration to him somewhere. But anyway, onto the food…

We came here for one thing, and one thing only: the Sunday roast. It takes a lot to surpass your traditional family lunch, but my guest and I both agreed that resistance was futile. This was simply the best roast dinner either of us had ever had, and elevated the humble roast to an epicurean feast: roast sirloin served pink with butter roasted potatoes, celeriac puree, Yorkshire pudding, seasonal vegetables, glazed Chantenay carrots, wilted greens and lashings of gravy.

To experience either of this destinations, visit Thevicaragecheshire.com or Thecourthousecheshire.com.

The Vicarage Hotel has announced a January 2018 offer for guests wanting to relax and escape after the busy Christmas period. Guests can enjoy an overnight stay with sparkling afternoon tea, dinner and breakfast for £95 per room based on two people sharing a twin or double room. To book this exclusive January stay at The Vicarage, call 01477 533 393 or email info@thevicaragehotel.co.uk quoting the code ‘Flat Cap Jan’.

With thanks to Perception PR.