In 2015, a staggering 1.9 million people attended live music events in and around Manchester. JLife dons the wellies and follows the music fans to see where they will be heading this summer… 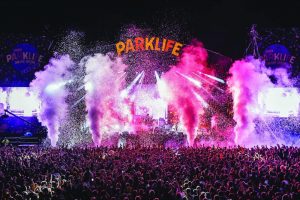 All the People
Heaton Park’s Parklife festival has once again outdone itself with the announcement of a star-studded line-up for the weekend of 10th and 11th June. Headliners include the likes of Frank Ocean, Fatboy Slim, The 1975 and Stormzy for the 2017 edition, while festival favourite Jess Glynne will also be joined on the Sunday by breakthrough artists Zara Larsson and Rag ‘N’ Bone Man.

Returning to the Prestwich site for the fifth year, Parklife is expected to sell out once again and anticipates welcoming around 140,000 revellers across the weekend.
Parklife.uk.com 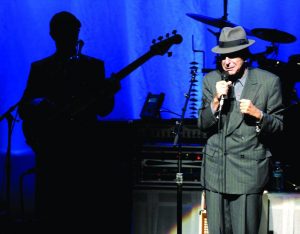 Festival City
The biennial Manchester International Festival (MIF) will be making a welcome return to the city from 29th June until 16th July. Featuring 18 days of world premieres, collaborations and special events by internationally acclaimed artists, the festival aims to bring together artists from different art forms and backgrounds to various venues across Greater Manchester. This year’s programme is a wide-reaching collection of music, comedy, theatre, visual art and dance events including BambinO – an opera for babies and a return to the city for Arcade Fire, the Grammy Award-winning Canadian band at Castlefield Bowl.
Mif.co.uk 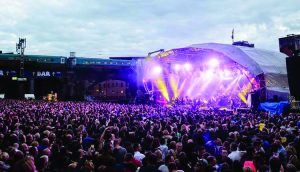 Sound Bites
Manchester legends James, The Verve’s Richard Ashcroft, and Stockport’s own Blossoms are all confirmed to play at the Sounds of the City festival at Castlefield Bowl from 30th June to 8th July.

New acts will join established favourites like The Levellers and The Waterboys in this annual urban music festival. The rest of the line-up is yet to be announced, but with past guests such as Noel Gallagher’s Flying Birds and Stereophonics, there is sure to be a little something for everyone this summer.
Gigsandtours.com 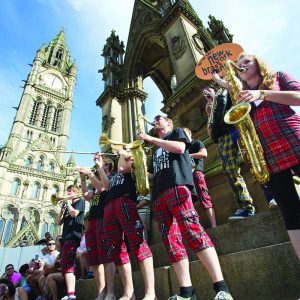 All that Jazz
The 32nd instalment of the Wigan International Jazz Festival from 6th to the 9th July will kick off with big band royalty in the form of Jools Holland & His Rhythm & Blues Orchestra at the Robin Park Leisure Centre. Back in the city, the crowd-pleasing Manchester Jazz Festival (MJF) will once again feature around 500 musicians across 80 events starting on the 28th July and concluding on 6th August. Championing the best regional jazz artists as well as the best contemporary jazz from the UK and abroad, MJF is a major event on the British jazz calendar.
Manchesterjazz.com 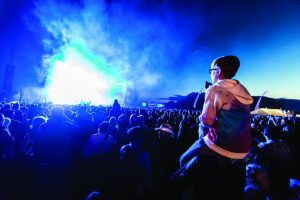 Blue Moon
Bluedot festival in Cheshire, which held its first event last year, has the unique pleasure of having Lovell Telescope at Jodrell Bank as its backdrop. The festival, which fuses music, arts and culture, has announced Goldfrapp, Pixies, alt-j and Hawkwind its major headliners on the weekend of 7th and 8th July.

There will also be a full weekend of space and science, from best-selling authors, academics and artists, as well as talks from world-class scientists and thinkers. All backed up by a family-friendly programme of science experiments and interactive shows.
Discoverthebluedot.com