Hamantaschen are like marmite, you either love them or hate them – and that’s all down to the traditional sticky-sweet poppy seed jam. The ones we make here are an ancient recipe from my father, he’s been knocking them out since the 1960s and the recipe has stayed the same for 60 years.

To make the mon we boil the poppy seeds for four hours to get them nice and soft before putting them through a grinder and adding sugar, syrup and cinnamon. The filling is easy, the tricky bit is the dough – if you let it over-prove, it’s game over!

In the run-up to Purim, it’s all hands on deck in the kitchen; we tend to roll out 50 cookies at a time, before packing each one with filling – it’s a despicable crime to be stingy with the mon. It takes a bit of practice to learn how to fold them properly to keep their shape, you have to fold one leaf over the other and turn them in such a way they don’t open up while baking.

It’s crucial to get your oven to the right temperature before you pop them in. You want the outside to have a bit of colour while staying nice and soft on the inside. They only need around 10 minutes, if you overbake them they tend to split and the outside dries out (G-d forbid!) – I think my dad would disown me!

You get all sorts of flavours these days, but we like to keep it simple. But about seven years ago we introduced a homemade chocolate fudge filling. You need a sweet tooth, but it was a winner with the kids. We also have a fruit jam using dried vine fruits and a little mixed peel – it’s very much like a Jewish mince pie! When the day itself arrives, we fill them with soft cheese for a savoury twist.

Our hamantaschen have always been a very popular, and customers ask for them all year round. Outside of the festival, we tend to do them as a mon kuchen, a long sweet bread with the mon filling.

Best Events and Ideas this Mother’s Day in Manchester

Rabbi Greg Bank on ‘The Grinch Who Stole Purim’

Hamantaschen is an Ashkenazi bake from Eastern Europe with a lot of history. We love the tradition – every year we have a megillah reading. We might not be able to do it this year, but 50 customers would pack into the coffee shop and listen to the story of Haman and Esther while they eat their breakfast and the kids rattle the cutlery.

Myself, my wife and our kids always make a point of getting dressed up together in themed fancy dress. Last year I was Mr Incredible – my wife said I have the belly for it. With the number of hamantaschen I sneak off the shelves, I can’t argue with her!

Folding your hamantaschen with Andrew step by step… 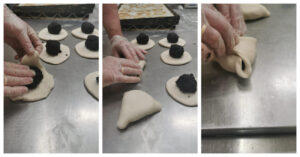 Hamantasch literally translates to ‘Haman pocket’ and there is nothing we Jews love more than symbolically eating our enemies – yum!

The poppy seeds are a nod to Esther’s diet of beans and seeds in the King’s palace to keep kosher – a true vegan Queen!

Some say the triangle shape represents Haman’s hat, while others say his ears, which were chopped off for being a naughty boy!