JLife gets to know Charles Harris, a best-selling author, educator and film and TV director, ahead of his forthcoming talk at Milim, the Jewish literary festival.

Hi Charles, tell us about your debut novel, The Breaking of Liam Glass.
It’s a satirical thriller about a young journalist who is about to be let go from his local newspaper, when he stumbles upon what he thinks is the scoop of the century; a boy, who he suspects is the secret lovechild of a Premier League footballer, has been attacked in the street. He pitches that and sells it to a tabloid but he can’t find out who [the father] is. It’s a strangely topical, dark comedy about the sometimes sleazy relationship between newspapers, politicians and police.

What inspired you to write about those themes?
It started with my interest in journalism, newspapers and the rise of ‘fake news’. Many years ago I had a holiday job at the BBC and I was very much a small fish, but you felt that you were at the heart of everything. That in itself is the danger, because you can get the delusion that you make the news and that you are almost as important as the news. So I started becoming more and more fascinated with how news is made. That led me down a path of exploration and to The Breaking of Liam Glass. I like writing satire as sometimes you get a more entertaining product than just political axe-grinding.

What was behind your switch to writing fiction?
I think it was a natural progression. Writing scripts is probably the hardest kind of writing there is, because there is no escape – it’s mostly white space. It’s rather like writing haikus for 90 pages; you have to nail it within very few words.

Also, most of the things you do don’t get made. Billy Wilder, the great Jewish film maker worked out that if he added up the time spent filming during his career it was a total of around two weeks. The rest is sitting around waiting for finance, for the stars, for make-up artists, or for the next film to start. So there’s something about writing a novel; you don’t have to wait for financers to agree, and the actors do what they are told, mostly.

You are speaking at Milim. What can we expect?
I’ll be talking about journalism, after my undercover trips to tabloid newspapers – some of which I had to be smuggled into. I also spent some time at The Mirror, which was enormously helpful and friendly.

I’ll be talking a bit about my career too; including my first feature film, Paradise Grove, starring Ron Moody and Rula Lenska, which was called “the Anglo-Jewish comedy of the year,” by The Jewish Chronicle.

Why did you decide to set your first feature film, Paradise Grove in a Jewish retirement home?
Actually, the retirement home turned up very late [in the process]. I had a character, a half Jewish teenager, who has a strange, edgy relationship with his Jewish grandfather, who is dying. It’s a very black comedy, a coming-of-age story really about [the teenager] learning how to leave, and the grandfather learning how to die.

But it was a long time, and I was well into almost the last draft, before I realised that it all took place in a home. It all fell into place and then, of course, a lot of the odd and surreal things that were happening in the script made sense.

How did you become involved with screenwriters’ resource, Euroscript?
A group of us got together to help each other learn to write and we started a workshop, called The London Screenwriters’ Workshop, which became Euroscript. I was away filming when that was founded but it sprung out of that and is still going strong. In fact, I just stepped down [as a director] to focus on my novels.

I get invited to festivals, universities and film schools and I do a masterclass in pitching, but I’ve run many courses in the past and most of what I’ve done I’ve put into books. The first one, Teach Yourself: Complete Scriptwriting Course is always up there on Amazon best-sellers lists. No one queries that if you want to become a brain surgeon, that you need to know how to do it, but somehow people expect to know how to write without learning. All the great painters went to learn under the great masters, musicians study under great musicians – so why shouldn’t writers? 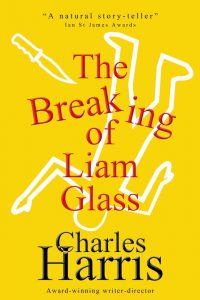 Charles’ top tips for budding writers:
• Read – read the kind of thing you want to write and read books on writing. I’m still buying them as there is always more to learn.

• Get Feedback – Nowadays writers have to be entrepreneurs, running their own careers. A good business person will surround themselves with people who will help them by telling them not what they want to hear, but what they need to hear.

• Edit, edit, edit – For my second novel, which I’ve just finished, I made sure that I hired an editor. Even before sending it to a publisher, I got my own editor because I wanted that feedback. You can’t do it yourself, just as a dentist can’t drill their own teeth!

As part of Milim, Charles will be appearing at Shadwell Library at 8pm on 7th March.

Chapel of Change
The Time Is Now
Related posts
Features-Leeds