As he takes up the mantle at Sinai Synagogue, we speak to Rabbi Paul Strasko about jazz, upholding tradition, and run-ins with the mafia.

[/vc_column_text][/vc_column][/vc_row][vc_row type=”in_container” full_screen_row_position=”middle” column_margin=”default” scene_position=”center” text_color=”dark” text_align=”left” overlay_strength=”0.3″ shape_divider_position=”bottom” bg_image_animation=”none”][vc_column column_padding=”no-extra-padding” column_padding_position=”all” background_color_opacity=”1″ background_hover_color_opacity=”1″ column_link_target=”_self” column_shadow=”none” column_border_radius=”none” width=”1/1″ tablet_width_inherit=”default” tablet_text_alignment=”default” phone_text_alignment=”default” overlay_strength=”0.3″ column_border_width=”none” column_border_style=”solid” bg_image_animation=”none”][vc_column_text]Rabbi Paul Strasko is the first to admit, he isn’t your conventional rabbi. When asked what brought him to Yorkshire from the States, he replies: “It has something to do with strange things in Germany to do with the mafia.”

Born in Montana, Paul began playing jazz professionally from 14, which led to university studies in classical performance, composition and theory. Playing six different instruments, he performed across the country with a traditional New Orleans style jazz band for seven years, and for the last four, he was clarinettist for the Seattle-based jazz flash klezmer trio, the Rootless Cosmopolitans. As can often be the case with music degrees, his education led to 12 years spent working as a project manager for pharmaceutical companies across the globe.

“Becoming a rabbi was a little bit far afield from my education and early career, but that’s also a pretty typical American story.”

When Paul moved to Seattle in the early noughties to work for a small clinical research software company, it was there he became increasingly active in a small local synagogue, Temple Beth Am.

“I believe its rabbi at that time, Jonathon Singer, is one of the great rabbis in the reform movement in America. He really encouraged me in communal Jewish life, and it wasn’t long before I started teaching and receiving invites to lead services as a lay leader.” 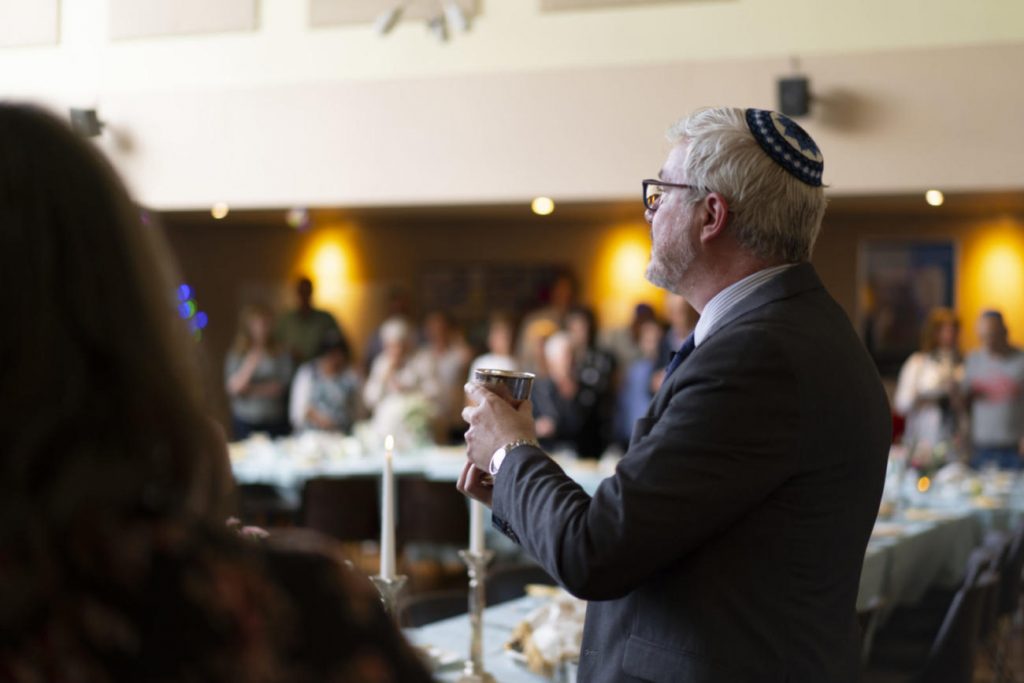 It soon became clear he was getting more satisfaction from preaching Judaism than working as a project manager. With the support of an understanding Jewish boss, he made the decision to undertake rabbinical studies at Abraham Geiger Kolleg in Berlin.

“I was crazy enough to go a very different route and applied to rabbinical school with his blessing, which proved a once in a lifetime experience. After I’d been accepted, he sent my holiday bonus to the school as a scholarship for me, which was an amazing thing for him to do.”

After completing his training, he began a year of academic study at the Steinsaltz Institute in Jerusalem followed by a year at the nearby Hebrew Union College, where he was honoured with the Michael Klein prize for academic excellence. After serving at reform institutes and synagogues across Germany, an unlikely run-in with the criminal underworld led him to make a hasty return to the States.

“Let’s just say during my last job in Germany, there was a takeover of the board of trustees, by people who were not incredibly interested in religious Judaism and might have had some interests to do with affiliations they had with the former Soviet Union.”

While serving as rabbi at Congregation Kol Shalom in Washington state, Paul cathartically wrote a novel based on his experiences, published in 2017 under the pseudonym P. A. Moses, entitled Women, Converts, and Azerbaijanis Need Not Apply.

When Paul married Katrin Bergmann, a German Jew, the couple began to plan a new life together: “At 47, I thought it was a good time to be thinking about a long-term commitment. We were looking at different options in Europe and the States, with the underlying thought of ‘what places can we imagine both of us living for the next 20 years?’”

In the final stages of securing a rabbinical position in the US, Paul stumbled across Sinai Synagogue’s appeal for a new rabbi.

“When you look at 100 job postings, they all start to look the same after a while. The people who put together the posting at Sinai obviously spent time doing amazing soul searching in how they wanted to communicate the position.

“It really came down to gut instinct: I was incredibly moved by the people at the synagogue and I found Yorkshire to be beautiful and its people authentic. The more we thought about it, it became clear Leeds was the place for us.” 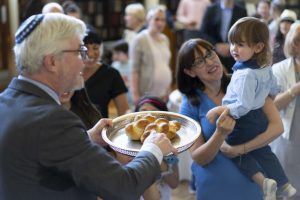 When pressed on his vision for his tenure at Sinai, Paul is keen not to unduly impose himself on the synagogue’s customs, mindful of cultural differences.

“In America having a big personality is a positive thing, but in Britain, it isn’t always seen that way. But that’s who I am, my musical training means I come in with a lot of confidence. I’m continuing to understand there are a lot of things to respect about British culture and British Jewish reform culture, as is different from reform culture in Europe or the States.

“For me, it’s about listening to what’s been done in past and talking to people without hubris. In time, if I believe I have an idea of how to move forward, then I’m not afraid to ruffle a few feathers.”

Declaring himself “a Jew first, a reform Jew second”, Paul finds pursuing reform ideology while upholding tradition a difficult balancing act: “I see Judaism going back to the Talmud as a dialogic religion, encapsulated by the concept that ‘we argue for the sake of heaven’. We need to have one foot deep in tradition, and the other foot in the needs of the moment.” 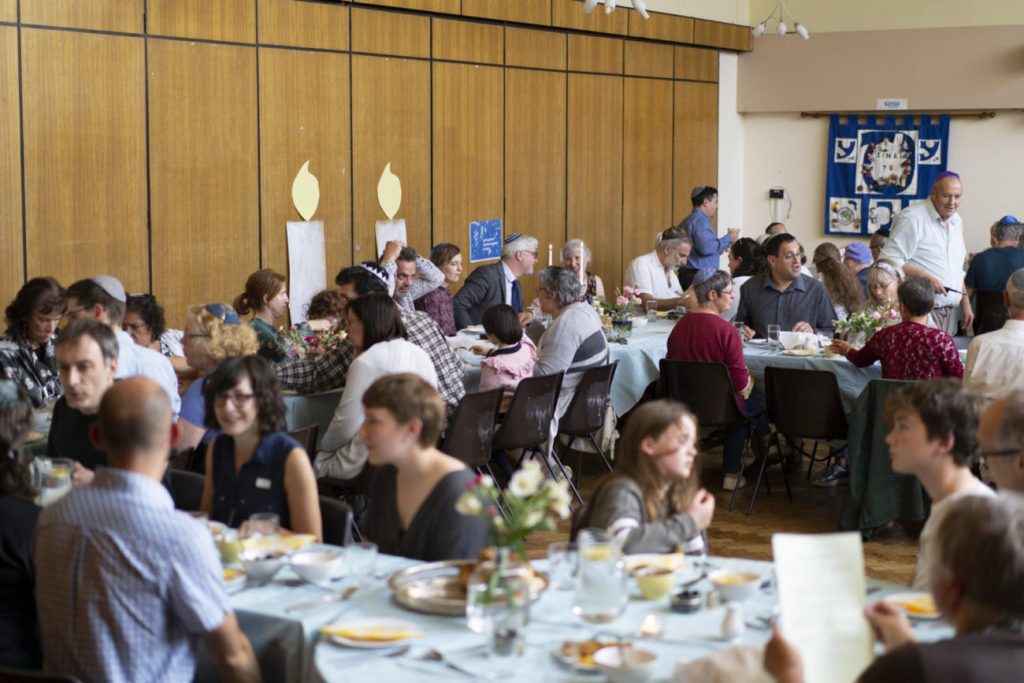 Paul hopes to address the community’s concerns and interpret Judaism in a way that helps people see religion and its rituals as a way of improving their lives, particularly when it comes to the stresses of modern living.

“I want to look at how we can use this amazing Shabbat tradition where we are asked to unplug, to get us to not to be obsessed over how many likes we’ve got on Instagram this week.

“Every Friday night, I say the same thing. ‘I love this as much as you do.’ For me, Shabbat service helps me renew my energy, and become aware of myself. I could make a lot more money as a project manager working for pharma, so if I’m choosing to do this, I’d better love it and believe in what I’m doing.

“You can become the most amazing hobby cricketeer at the weekend and that can act as an ersatz religion, and that’s awesome. But what’s amazing about Judaism, is it contains thousands of years of wisdom from which you’re always going to find relevancy. I wouldn’t have become a rabbi if I didn’t believe that with every part of my soul.”

Other than at university, Paul admits he’s more in a dialogue with musical history and theory in the synagogue than he’s ever been.

“When you think of what a cantor does – I’ll never say I’m a cantor, I’m just a rabbi with cantorial training – you’re singing more in a 25-hour period of time than the lead soprano in a major opera company over the course of a week.”

However, plans to join a Leeds-based band have so far been thwarted: “The problem with most jazz groups, is they need to play on the sabbath and that makes it a little difficult for a rabbi. But there’s a real joy in being able to sing, compose for liturgy and work with the kids musically at Sinai.

“I’m sure there are some, who every time they see my guitar want to scream. But the reality is, if I use guitar during the service, it’s trying to centre the tonality to get involvement through meditative traditional melodies, which can have huge emotional impact when they’re evoked.”

“I want people to come in, close their eyes and sing to find their way out of the stress of the week. We also do shots of vodka and whisky after the service. I figure half the people who show up are just waiting for the shots!”

‘Women, Converts, and Azerbaijanis Need Not Apply’ is available on Amazon.[/vc_column_text][/vc_column][/vc_row]