Skip to content
Interviews-Leeds  The Café with a Conscience
FacebookTwitterPinterestLinkedInTumblrRedditVKWhatsAppEmail

Hi Anna, tell us about your background.

I live in Roundhay but I grew up in North London. My grandma, a daughter of Eastern Europe refugees, grew up in Harehills. My background is in Jewish education, with a particular interest in Holocaust memory, how we remember and what we remember. I decided not to pursue a career in this – I just didn’t feel strong enough – but it has always been important for me to think about the lessons learned and I’ve grown up vowing never to be a bystander.

I’ve always been inspired by the values of tikkum olam, trying to repair the world with social action. All of these values were embedded in me from a young age through my work with national youth movement, RSY Netzer. When I met my husband and moved to Leeds, it was the first time I really looked outside the Jewish community to practice those values.

How did the idea for a community café come about?

While I was working as a youth and community worker at Sinai synagogue, I was volunteering in a Wakefield shelter for newly arrived asylum seekers. It was there I met Anita, an asylum seeker from Albania. She had a son of a similar age to my kids and we just connected. You can be relocated to anywhere in Yorkshire and the Humber and she happened to get relocated to Harehills, so I turned up at her door and there began a very strong friendship that still continues today.

One of the things that I’ve been blown away by is the struggle she faces as an asylum seeker, being a single mother with English as a second language, while being denied opportunities I took for granted.

I now have a greater appreciation of my grandparents’ story. My eyes were opened to how life must have been for them trying to adapt to a new city. I felt that this was the path I was meant to take and I wanted to replicate this friendship by creating a space where people could meet and a community could flourish.

What I’m learning time and time again through the café, is the power of words, eye contact, sharing your privilege and giving someone that little boost to help them through their day. It doesn’t cost anything and is often the most valuable thing you can give.

Tell us about how you started Toast Love Coffee (TLC).

Back in 2014, I started off just wanting to host a pop-up coffee morning – I didn’t want to take on a massive project. But it became clear that there was a huge need for a space like that, so we went from opening up once a week to three times a week in the Community Action to Create Hope (CATCH) youth centre.

In October 2017 we felt it was time to become independent of the youth centre so we found a premises on Harehills Road on the former site of the Leeds Building Society and opened in December 2018.

Why did you choose to set up in Harehills?

Because of my grandma and Anita, it had to be Harehills. My mum can’t believe that I’m running a café in spitting distance of where my great-grandma used to run a sweet shop.

Living in Roundhay, it’s still LS8 but it feels like different worlds. When I first moved to Leeds I was told to drive up Scott Hall Road to go home and avoid Harehills and Chapeltown. It has a bad reputation, but we’ve had the most amazing welcome from local people.

We want to be a place where we’re challenging the stereotypes of the area, embracing all the wonderful things the community has to offer.

So how does it work?

We have a ‘pay as you feel’ concept, so in return for a coffee or a meal, we ask customers to donate whatever they can, or if they’re not in a position to pay, offer their time or skills to help the community. Many of my nearest and dearest were concerned that people would take the mick, but the issues we’ve had are people being too generous. We also have had people walk in who are vulnerable and perhaps don’t understand the value of money, trying to give £10 for a cup of coffee.

We’re part of the Real Food Junk Project, so we intercept food that would otherwise go to waste. We get creative with what we have and serve healthy, vegetarian and vegan meals. Harehills Road is flooded with chicken and chips shops, so the local people have been desperate for something healthier. We make everything fresh! Right now I can smell lunch being prepared – it’s a quinoa and vegetable soup! We’ve got amazing volunteers who love to cook, so we say “here’s an apron, here are the ingredients, go off and make lunch!”

Carving Out a Niche

The Café with a Conscience

How is the project funded?

We’re not a charity – we’re a not-for-profit social enterprise with any profits we make invested in tackling social isolation and improving community cohesion in Harehills. We’re working really hard to make sure we’re a sustainable business. We’ve got lots of ideas for creating income, such as renting out the upstairs spaces and catering lunch platters for local businesses that will ensure we’re not reliant on external funding.

Everything is donated and we try to keep costs down to an absolute minimum but it’s proving expensive to just do that. We have a volunteer coordinator and a café manager which are both paid positions. The funding for our volunteer coordinator comes from Time to Shine, a programme combatting social isolation for the over 50s. She’s done amazing working reaching out to people in the area.

Fundamentally, our business model relies on us inviting our customers to be as generous as possible. If you’re used to spending a fiver in Starbucks, I’d like to think that people would rather give that money to us!

Tell us about your volunteers.

We’re hugely reliant on them, but we’re not a soup kitchen, in terms of the ‘haves’ giving to the ‘have nots’ – everyone gives and everyone takes. We’ve got volunteers of every background –there are people who can’t affor

d to put the heating on at home, so they can have a brew and a chat in a warm place, and there are those who are simply trying to combat loneliness, which of course crosses all social barriers. I believe this is a place where you can be the best of yourself, and we try and give people the chance to shine.

In what ways do you hope the café will help the community?

We’re a place where everyone is treated with humanity and respect. Last week we had a group of guys standing outside smoking, so we invited them in. They were homeless and starving, but the conversation went along the lines of: “We couldn’t possibly come in. This place is too nice, it’s not for us.”

One of the things we’re learning to be aware of is the image we’re presenting. We’re quite on trend with an upcycled shabby-chic interior that wouldn’t look out of place in Chapel Allerton, but here in Harehills, it kind of stands out.

I introduced myself, and told them “we want to feed you, we welcome you, please give what you are able to, but please come in.” I love feeding people – I’m a Jewish mum after all!

We brought out rounds of pastries, smoothies, coffee and they were brilliant, giving us great banter, being really respectful and even leaving coins on the tables, even though they didn’t need to. They promised they would come back and help – there are always things that need doing, bins emptying, windows cleaning – we tell people they can give back however they can. 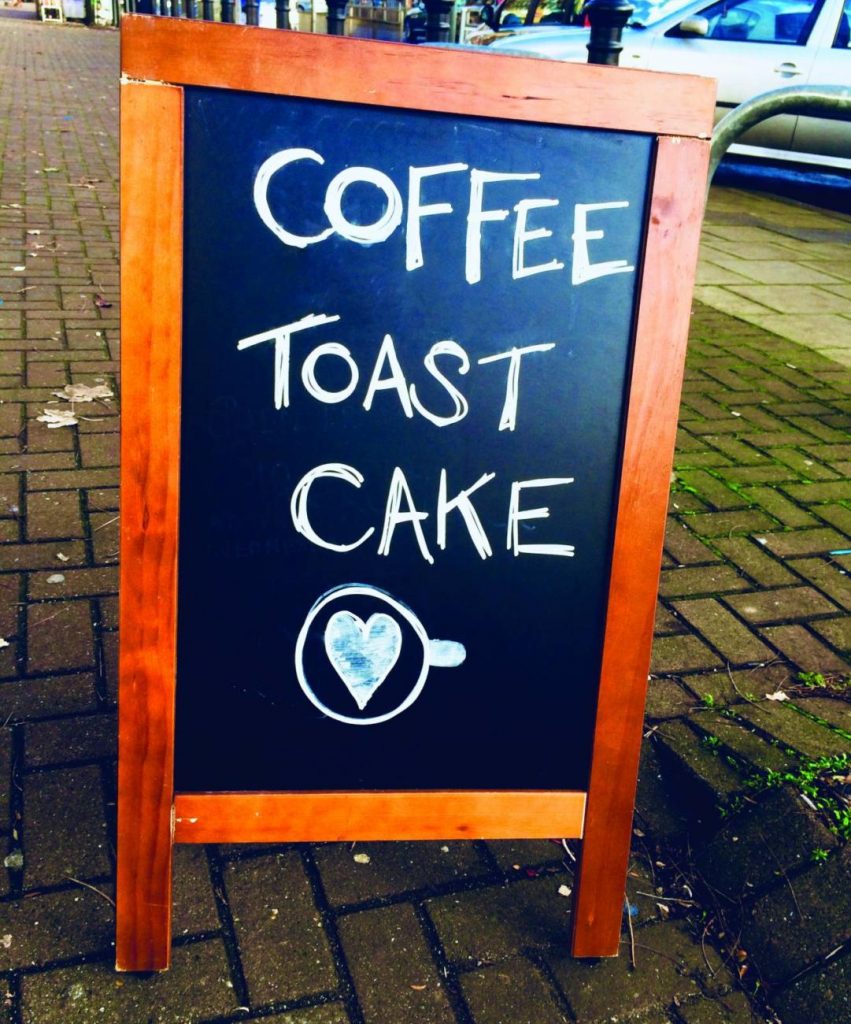 How has your first month been?

We had a break-in, which is not the greatest start. The break-in cost us £200 which is really painful for us. But hopefully it will be a catalyst for generosity within the community. We have three floors, but we’ve had to concentrate on getting the ground floor running as a café. We received £25,000 for the refurbishment including a £10,000 grant from Awards for All, sponsorship from local businesses and money from our Facebook fundraiser, but unfortunately the funding has run out!

However, we recently won a competition organised by local business Chef Works, which very generously offered £1,000 to the winning third sector organisation who won the most likes for its picture on Instagram. We smashed it out of the park, and hopefully that money will help us finish off the event spaces.

We have two rooms that will be available for local community groups. The plan is within six months we’ll be having workshops up here, with English classes, yoga, cooking and crafts. We’ve got potential to develop on the third floor and one idea is to provide emergency accommodation for asylum seekers or women escaping domestic violence. We want to be a honeypot for community work and a space where things happen.

We hear you received an award for your work at TLC.

At the end of last year, I was honoured to receive the ‘21 for 21’ award, a nationwide project coordinated by Jewish News, Church Times and British Muslim TV which celebrated the interfaith work of seven Jews, seven Muslims and seven Christians. It means I may meet the PM – although there are of course bigger things on her agenda at the moment…

How can readers get involved?

The best way to help us is to be a customer and participate in the culture of conversation. I always say it’s like hosting a kiddush. We’d love people to come and sit in the café front of house, start chatting, introduce people and host that socialisation.

We’re very open to any ideas people might have for sharing their interests within the café in a way that gets people through the door and starts a conversation. We had a doodle club run by a local artist, who couldn’t give much, but came down for a few hours and invited people to join him doodling and that was a great way of crossing the language barrier which many of our patrons can sometimes find difficult.