Fran Horwich, co-founder of the Midlife Crisis Theatre Company, spoke to JLife about treading the boards, being in the director’s seat and roles for women.

From the cobbles of Coronation Street to becoming co-founder of the Midlife Crisis Theatre Company, former professional actress Fran Horwich tells JLife how a bunch of bright, talented women have been bringing belly laughs to the Manchester arts scene.

Fran, who is Manchester born and bred, opted to do a degree in drama and dance over attending drama school, but was previously a member of the now defunct Manchester Youth Theatre, which she describes as a “hotbed of talent – lots of people that I was there with became professional actors.” 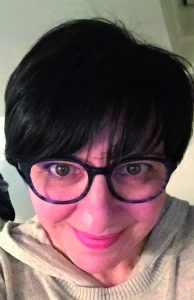 “After that I did mostly theatre, some TV, but only ever small parts, and I also did a lot of theatre in education,” she continues. “I did Coronation Street for a little while…I was a machinist in Mike Baldwin’s factory.”

Cooking Up a Storm

After taking a break from acting, Fran and Gill Cooper, fellow co-founder of Midlife Crisis, made the decision to tread the boards once again – but this time on their own terms. “I’ve known my friend Gill since we were very young girls,” says Fran. “In fact we were in the Manchester Youth Theatre together. We both went on to be professional actresses for a while and we remained friends. We both got older and had our kids. Neither of us had been involved in acting for a long time and thought we’d like to give it another shot. We found a play that was a very good vehicle for two strong female leads, which was The Odd Couple, the female version, by Neil Simon.”

Having found the perfect play, leading ladies Fran and Gill needed a supporting cast, so decided to take their friends along for the ride too: “We sort of strong-armed some of our friends into taking the other characters. For a lot of them it was their first production,” explains Fran.
The group’s bow at the Whitefield Garrick Theatre was a rousing success but it took 13 years for the cast to reunite on stage again.

“We tried very hard to capture the moment again but we just never seemed to do it. We found different plays but none of them seemed to work for us. My husband got ill and subsequently passed away, so lots got put on the backburner because life gets in the way. One of our members went to live in Spain for a while and it took a very long time for us to get back on track.”

The eagerly-awaited follow-up finally happened this spring, as Fran, now married to professional photographer Ed Horwich, and co tackled another legendary comedy in the form of Peter Quilter’s Curtain Up. The theatre group’s second outing also went down a storm. Although, this time Fran, buoyed by winning Best Director at the National Operatic and Dramatic Association (NODA) North West District Awards 2013 for her production of Jack Rosenthal’s Bar Mitzvah Boy for The Jewish Theatre Company, took on the director’s role.

“We found a play and amazingly everybody who was in the first production was available for the second production. We are currently looking for our next project, so we are hoping that next spring we will be doing another play.”
As to whether Fran would consider sitting in the Midlife Crisis director’s chair permanently, she replies emphatically: “This time I’m definitely going to act. Someone else can direct it and I’ll get back on the boards. I’m frightened that if you don’t get back on them you forget how to do it.”

Fran, who also works for the Association of Jewish Refugees (AJR) as a representative and northern volunteer co-ordinator, says that one of the biggest challenges of running a small theatre company is finding a venue.
“It is really hard as there are so few small theatrical venues available. The place that we were in last time, 53Two, which is in the centre of Manchester, is more like a pop-up venue. Our current search is on for the right play and the right venue. We’ll keep our fingers crossed.”

When asked how much of the theatre company’s rave reviews could be attributed to group dynamics, Fran states: “Because we know each other we trust each other. When you trust the other people on stage you are more willing to take a risk. In Curtain Up one cast member was dressed in a tiny outfit looking like Liza Minnelli and that’s a great thing to do for a lady in her mid-50s – she looked absolutely amazing but I think that bravado comes from us being together and saying ‘we can do this’. I do think that makes a big difference.”

Finally, when speaking about roles for women in theatre, Fran is optimistic about the future: “I’m really impressed at the moment with how mainstream theatre is allowing women to play historically male roles. I think that is a great move in the right direction and I’d like to see more of that. Maybe Midlife Crisis could do that next. We are essentially a female company – most of us are women.

“It is so, so difficult to find plays with strong female roles,” she elaborates, “but not only that, plays with strong middle aged female roles. I think so many parts for women are for the young love interest, the supporting role, the eye candy role. We are really keen to just let women be as they are when they get older. It’s important that women in their later years are also celebrated. It’s very hard to find the roles – maybe I’ll have to write them!”

Here at JLife, we’ll certainly be keeping our eyes peeled for Midlife Crisis’ next outing.