From Manchester to LA; Interview with Paul Cohen

TV presenter and author Fern Britton has joined the cast of the musical, Calendar Girls, set to arrive at The Lowry in August. JLife’s Evangeline Spachis chatted to her about the role, plus her life-affirming trip to Jerusalem…
As a much-loved television presenter and now successful author of seven novels, Fern Britton has been a fixture on our telly boxes, thanks to classics such as Ready Steady Cook and her time on This Morning with Philip Scofield, and most recently, her BBC Sunday morning programme, Fern Britton Meets, seeing her interviewing the likes of Dolly Parton, Gregory Porter and Desmond Tutu. But now a new challenge awaits!
Currently in the middle of rehearsals for Calendar Girls The Musical when we speak, it appears that the exhilaration of being part of an incredibly successful musical phenomenon is already taking hold: “It’s really exciting. They are long days and the travelling is a factor, because I’m knocking on a bit!” jokes Fern, in her charmingly self-effacing way.
“My lovely daughter at home who’s 21, when I get in, she’s got supper and a drink ready for me, bless her heart. But it is just a joy to be part of it. I am loving it.” And the cast of actors, that includes Anna-Jane Casey, Sara Crowe, Karen Dunbar, Ruth Madoc Rebecca Storm and Denise Welch as ‘the girls’ have welcomed her into fray immediately: “I’m not part of the clan at all, I’m not an actress, and they have been so welcoming and so lovely. I couldn’t have asked for more.” 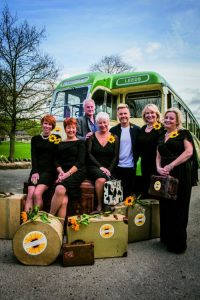 Calendar Girls The Musical is inspired by the true story of a group of ladies who decide to appear nude for a Women’s Institute calendar in order to raise funds in memory of one of their husbands and for the charity, Bloodwise. The musical comedy shows life in their Yorkshire village, how it happened, the effect on husbands, sons and daughters, and how a group of ordinary ladies achieved something extraordinary.
Fern, who joins the critically acclaimed and award-winning production after it has just played a six-month London season at the Phoenix Theatre, and, before that, in Leeds and Manchester, was last on stage 30 years ago in pantomime, and it did take a little persuading to tread the boards again. But thankfully, a certain Gary Barlow sealed the deal: “They asked me do it, I said ‘oh no, thank you’ and then a week later my agent rang again and said ‘they’re still interested you know?’ and I was like ‘no, no really, thank you’. I then got an email saying that Gary Barlow would like to have coffee with me, so what you are gonna do? Before I knew it I was reading the script and suddenly I had the job!”
“He’s always charming and lovely and he’s bloody clever,” Fern reveals of Gary, who co-wrote the musical with Tim Firth, his longtime friend and collaborator. “And working in collaboration with Tim who wrote the movie, wrote the play and then the musical, they are genius and it’s just been an extraordinary collision of the stars.” 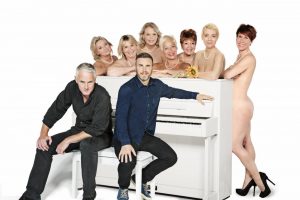 Fern will be taking on the role of Marie, whom she describes as “a person who finds it quite difficult to make friends and keep friends”, who arrives in the Yorkshire village and immediately becomes chair of the WI. She cares about the cause deeply, but “does not want them to do the calendar as she believes it is against every principal and every moral of the WI. She’s not easy to get on with at all, but as soon as the calendar is a huge success, she then accepts a little bit of the glory!” Fern admits.
It must be a challenge to play someone that isn’t instantly likeable, especially for someone who is known for their pleasant and light-hearted demeanor on TV: “I’m still finding her and finding out who she is and how to play her. I’m sounding like an actor, I know – but I had to step up my game as I am working with consummate professionals. “She’s got some laughs too, even if she doesn’t know that she’s funny!”
Part of the success of the musical has to be the universal themes that audiences and the company alike can’t help but continue to be inspired by. Fern agrees: “I think the story is very uplifting and being uplifted is inspirational because you can think ‘I can be a better person, a more generous person, a kinder person’, and yes, life is about making a mess and trying to get through it with friends and in any way that you can. It’s not a sanctimonious and pious story, it’s just real people having to get over losing a very integral part of the community. And when people die, you never realise until they are gone how much they meant to you.”
Last year, Fern made a documentary about Jerusalem for the BBC called ‘Fern Britton’s Holy Land Journey’ and decided to get a rather permanent souvenir to remember her time in Israel – a tattoo. Speaking to Fern, who is a practicing Christian, it is clear that the “magic” of the city has stayed with her, beyond it being permanently etched in ink on her wrist: “I do reflect on it often, I have it on my wrist and I see it every day and it does remind me of Jerusalem itself and the story, the emotion and the power that seems to be within that city.”
People have been so nice about it too – people who don’t even have a religious life or whatever religion they are, they’ve all appreciated the atmosphere and the message.”
So she’s got a tattoo, she’s a bestselling writer, a queen of daytime telly and now starring in a smash hit musical, what’s left for Fern to achieve?: “You know what I’d really like to do, I thought of this this morning, I’d love to work in Waterstones. So maybe I’ll go do that when I’m finished with this!”
Calendar Girls The Musicals is at The Lowry in Salford from 30th October until 10th November. To get tickets, visit TheLowry.com.