Hi Graham, so tell us about yourself!
This is the last of my three years as chair of Bury Choral Society. I’m just on the brink of retiring as a town planner and environmental consultant having been in local government and then private practice. Singing has always been a great pleasure of mine, as for many people, it’s both a source of musical enjoyment and a great physical release.

What is the raison d’être of Bury Choral Society?
As a registered charity, we aim to go out to people and perform choral music to the best of our ability, doing our bit to contribute to the cultural life of the borough. We’re continuously improving our standards, always have a great programme, and take a very professional approach to putting on recitals.
There’s been a big movement of new choirs popping up singing pop, rock and folk, but we’re here to keep alive a great tradition of choral singing that is rooted in the north. The music we’re singing demands a higher standard. We can’t achieve what the Halle does. But we do have a number of ex-Halle singers, and ex-members who have gone on to sing with Halle.
Back in May we performed Rossini’s Stabat Mater in Bury Parish Church with four professional soloists and a small orchestra made up of graduates from the Royal Northern School of Music plus other seasoned professionals – so that gives you an idea of the standard we aspire to.

We hear you’re one of the oldest choral societies not just in the UK, but across the globe?
We date from at least 1838, as we have an item in the archives which says ‘the next concert will be’ – and if there’s a ‘next’, we assume there must be ‘a one before’! We’re about four or five years younger than the famous Huddersfield Choral Society and we think Halifax is the oldest subsisting choir, and is about 15 years older than us. Ironically, it is Yorkshire that has pipped us to the post!
Who are the talented singers that make up your chorus?
It’s important to remember we are all amateur singers, however we are an audition choir – it is vital that people have a voice that will be able to perform. If you can sight read, it helps because if you’re singing something like Bach’s Christmas Oratorio or Handel’s Messiah, there’s a lot of music to get through and learn in a fairly short period of time.
We’ve welcomed people from all walks of life. We have doctors, nurses and quite a few teachers of different modes. We also enjoy having many members from the local Jewish community.
Amateur musicians have a lot to offer when it comes to keeping alive the great tradition of singing this type of music. Only a limited number of orchestras have choirs attached and they can only perform a limited number of works per year. As amateurs, we have the opportunity to perform some of the great music that otherwise you’d never hear. 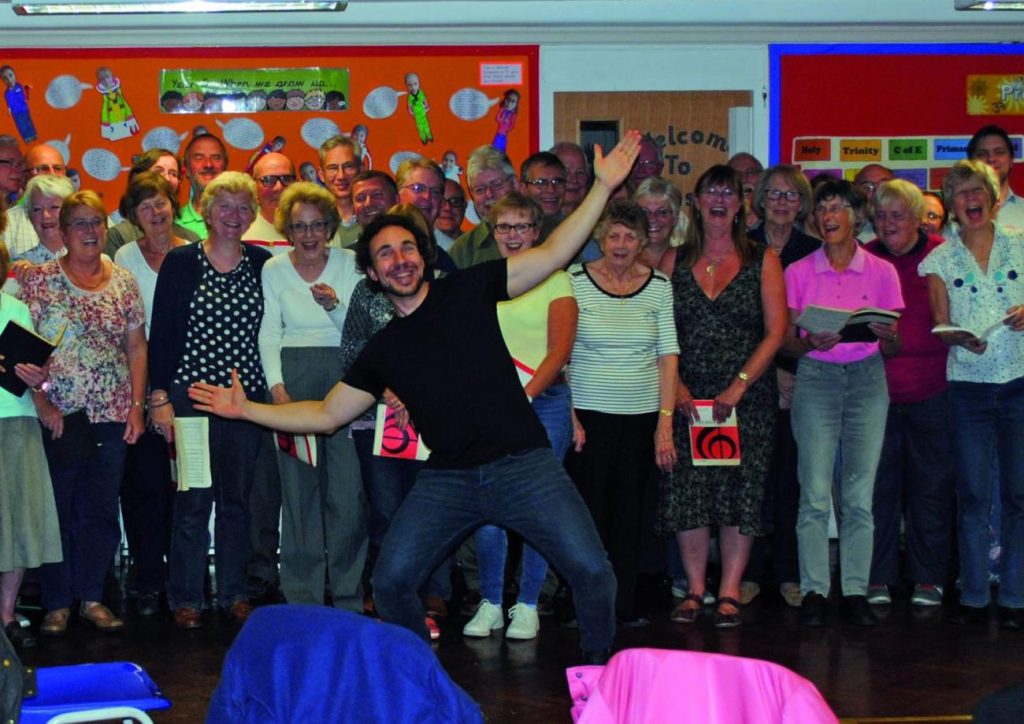 Give us a flavour of the composers that feature in your programmes.
We’ve always sung new music you might loosely call classical, but we perform such a variety of choral music, particularly from English composers. We start as far back as Byrd, through to Handel and go all the way up to modern day living composers like John Rutter, Bob Chilcot and Karl Jenkins. On our first programme from 1842, there was a piece by Rossini – and we still sing Rossini!
Five years ago was our 175th anniversary and we commissioned a new work from Zakiya Leeming named Cotton Mills. Another world premiere was a piece Peter Skellem was commissioned by the BBC to write for a remembrance service which we sang at our armistice concert last November.

We understand the society has benefited from professional musicians?
Until 2008, we had a longstanding conductor of 39 years called John Edwards, an organ scholar at Gonville and Caius College Cambridge who went on to become head of music at the boys Bury Grammar School.
After John retired, we welcomed a conductor called Sinead Hayes, who immeasurably raised our standards, improving the whole experience for our audience by concentrating on giving solo parts to professionals. She left to become the chorus master and assistant conductor for the Irish national opera.
We currently have a Spanish conductor called Juan Ortuño. Juan is very charismatic, enthusiastic and a great performer himself. We have our two accompanists: Jonathan Ellis, a magnificent pianist and a soloist in his own right and Ellin Rees, organist at Bury Parish church.

Where can our readers find you performing?
We generally try and perform right around Bury, but the main problem is obtaining a suitable venue which can accommodate us, an audience and potentially an orchestra, as well as having the acoustics. Unfortunately we don’t have a suitable secular venue in the borough and the trouble is, when you tour elsewhere, you have to take your audience with you.
We’ve sung at The Met in Bury and we’ve also performed at the Royal Northern School of Music, but we generally sing in churches because it doesn’t cost as much. Three out of four of our concerts will lose money – the sheer cost of putting them on means we essentially subsidise them. The only money we receive is from ticket sales, membership subscriptions, and programme sponsorship.

How are you trying to attract a wider audience?
Last April we performed Jenkins’ The Armed Man, a notable piece played a lot on the radio. We recently performed it a second time in a new format we’ve coined called a ‘compact concert’. Instead of a traditional 7.30pm start, we performed it on a Sunday afternoon, just for an hour. It was an absolute sell out and we received a standing ovation at the end of it. We feel it works very well and is a very pleasant way for people to spend a cold, wet Sunday afternoon and we’re hoping to put on more events like this in the future.
Is there a difficulty in attracting younger singers?
Like most choral societies, we’d always like more young people. We have a few in their early twenties, but I suppose that demographic mostly want sing in different kinds of choirs. Two younger ladies who recently started, they just enjoyed singing at school and decided they would like to sing with us. 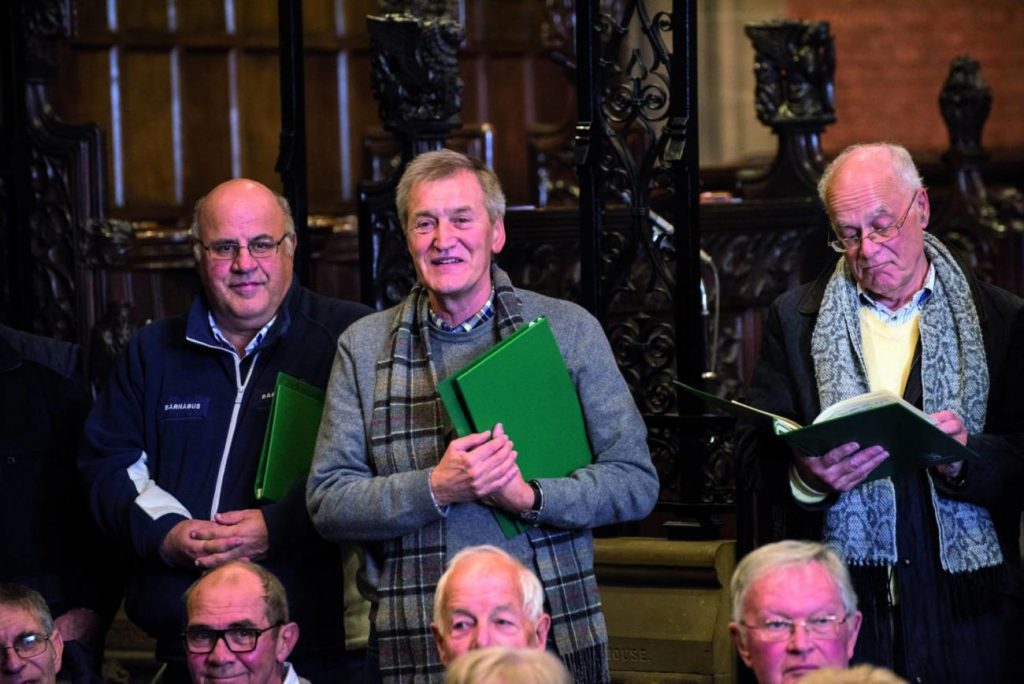 Any chance of including some Taylor Swift on future programmes?
No, we don’t have any plans to turn into a Glee Club. Some of what we sing is a bit lighter, but at the same time, pop is not what we sing because there are other choirs doing it. Sometimes we do cater to popular music. With our Christmas concert we even finished with White Christmas!

So how do our budding vocalists get involved?
There’s always room for more people. Like all choirs, we’re always looking for more tenors, men particularly. We meet every Tuesday at 7.30pm for a couple of hours at Holy Trinity School, it’s very informal and we just get to work! Just come along to our rehearsals on a Tuesday night – it’s as simple as that.

Give us a flavour of what’s coming up!
Our first concert of the year is Of Kings and Queens at Bury Parish Church on 16th March, with a programme including Purcell’s Music for the Funeral of Queen Mary which is very grand with lots of trumpets and drums, followed by Cherubini’s Requiem in C. Now there’s a piece of music not often performed, but in fact a work Beethoven and Brahms admired greatly. That’s a prime example of how we keep certain music alive that some of the big orchestras and their choirs just simply can’t perform.
Then, on 18th May we’re singing Handel’s Judas Maccabeus at All Saints Church, Whitefield. Now I’m told Judas Maccabeus as a piece of music and of course the story is something which has been much fated by Jewish members of the population!