JLife chats to Councillor Jane Black, the new Mayor of Bury, to find out how life has changed since being sworn in as the borough’s First Citizen.

From ceremonial gowns to ribbon cutting and official titles, Councillor Jane Black is still adapting to life as the new Mayor of Bury when she takes time out of her busy schedule to chat to JLife. It’s only been a matter of weeks since the Prestwich native was sworn in at Bury Town Hall, taking the chains from the role’s previous incumbent, Councillor Dorothy Gunther; but Cllr Black is taking the wide ranging responsibilities in her stride.

“When people write they’re supposed to call me ‘Your Worship’ which takes a bit of getting used to”, jokes the University of Birmingham alumna who, following her inauguration, is now believed to be the eighth Jewish Mayor of Bury since the town became part of Greater Manchester in 1974. “I am from around here, so I know a lot of people already, but I’ve had a big welcome. My 88 year-old mum has had people coming up to her to say congratulations.”

Speaking ahead of a mayoral Shabbat service at Sha’arei Shalom Synagogue in Whitefield, just one of many events she’s attended in the past few whirlwind weeks, Jane says: “It is an honour and a privilege. At the moment it does feel very busy and I’ve been told it’s going to get even busier. I want to be a mayor for all the communities of this borough.”

Born in Salford but raised in Prestwich, Jane is a former pupil of both Sedgley Park Community Primary and King David Junior schools but, like many, her roots stretch further afield. “My mother’s family came from along the Polish-Russian border, while my dad’s family is from Romania,” she adds. “I’ve had some very proud moments so far like representing the council at citizenship ceremonies – given that I have immigrant grandparents myself, that’s very humbling.”

In With the New 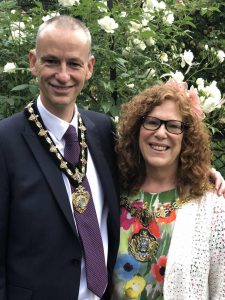 Jane’s husband Mark Sankey, with whom she has two grown up daughters, Elena and Maya, will act as the Mayor’s Consort during her term in office. Balancing duties is nothing new to Bury’s new mayor, however, as Jane continues: “I’ve been a local councillor since 2012 and, during that time I started to work part-time at Manchester Metropolitan University, so I’m used to juggling a job with the role. However, I made the decision to give up work and devote myself full-time because I want to do it properly, and a large part of the job is visiting groups, schools and organisations that are contributing to making Bury such a great place to live.”

On the subject of Bury, Jane has every reason to be proud, as property website Rightmove named the town as ‘the happiest place to live in Greater Manchester’ in 2017. “There are good quality schools, lots of green spaces and good transport. It’s not one of the places you think of straight away but I think it has a very strong and diverse community – all year long there are events taking place like Prestwich Carnival and food nights at the local market.”

When quizzed on her inauguration, Jane admits the pomp and ceremony is “quite unlike anything I’ve done before, it’s called ‘mayor making’ and it was very formal. The old mayor comes in to start the meeting and then goes out and the new mayor comes in.”

“It was all a bit of a fanfare – there’s an army regiment and trumpeters and speeches. The first council meeting will be in a few weeks’ time but I won’t have to wear the robes for that, it would be a bit too heavy, although I am expected to wear the chains!”

As for what to expect during her tenure, Jane outlines a varied roster of mayoral responsibilities: “I’ve been making the joke that I’ve been cutting a lot of ribbons. On my first day I raised a flag pole and I’ve cut a ribbon at a care home, gone to a cricket tournament at a primary school, and cut a cake. I also recently attended a steam train trip with a group of people with dementia and went to Bury College to present certificates at a junior Masterchef-style competition, so I’m starting to meet people in the community who have been doing good work for years.”

But it’s the Mayoral Charity Appeal that holds a personal dimension for Jane, who says: “I’ve chosen two charities and one of those is The Fed at Heathlands Village – it’s a tremendous organisation and has links beyond the Jewish community. It does a lot of work with people with dementia – it’s an organisation that I’ve grown up with.”

The mayor’s other chosen charity is Grace’s Place, a north Manchester hospice for children with cancer that also provides community outreach. “Cancer charities are very important to me as my brother, Simon died of it 10 years ago,” explains Jane. “Last year I walked the Great Manchester Run for Chai Cancer Care.”

Fundraising and highlighting local causes are set to be two of the cornerstones of Jane’s office, so keep your eyes peeled for a host of Bury-based events including a Bollywood night, a 10k run and a mayor’s ball.