John Fisher rounds up the best of this year’s Milim literature festival.

The Zone Plans Session for Children Transitioning to High School

Down to a Tee

Milim literary festival continued to entertain Yorkshire audiences for the third year running with an eclectic array of performers.

Joshua Seigal, poet, performer and workshop leader, certainly inspired his young audience at The Zone with creativity through an afternoon poetry and fun-writing crash course. Joshua read an excerpt from his book I Don’t Like Poetry. 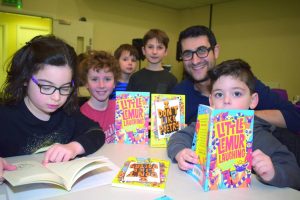 In the evening of the same day, Emma Gordon, Nicola Hipps and James Nash took to the floor at The Lounge in Stonegate Way to deliver a moving and sometimes humorous poetry evening with Poetry Café, which brings poets together for an evening of poetry performance and appreciation. James began his career as a teacher prior to becoming a writer, while Leeds-born Emma, who has been performing since the age of three, is now working as a creative practitioner and Nicola has her own drama school and brought some of her pupils along to entertain.

Food was definitely on the menu when food writer and chef Lisa Roukin described her connection with cuisine, telling the audience and interviewer Francine White at Seven Arts in Chapel Allerton of her passion for cookery, believing that a healthy relationship with food involves eating delicious nutritional meals that feed mind, body and soul. Lisa described how as a teenager she became obsessed with self-image which developed into an eating disorder. She overcame this with guidance from her grandmother and trained at Le Cordon Bleu Cookery School to finally redefine her relationship with food.

Leeds-born Abi Silver, calling on her legal background, has created a legal thriller with a twist in The Pinocchio Brief and read extracts from her novel at The Leeds Library, while Ami Sands Brodoff, nominated for the Pushcart Prize for her debut novel Can You See Me? moved her venue from Leeds Central Library to a private home in Alwoodley due to bad weather conditions. Drawing an audience fascinated to hear her discuss the inspiration behind her new novel, In Many Waters, Amy related the story of three orphans whose lives intersect on the island of Malta and grapples with our current refugee crisis. Ami Sands Brodoff’s previous novel The White Space Between, which focused on a mother and daughter struggling with the impact of the Holocaust, won The Canadian Jewish Book Award for Fiction.

Down to a Tee