Israeli choreographer, Hofesh Schecter brings his acclaimed troupe of young international dancers to HOME for his newest production SHOW from 31st October to 3rd November, following his 2017 sell-out production, Grand Finale. SHOW revolves around a group of anarchic performers as they play their roles in a macabre circus of comedy, murder and desire. Accompanied by Shechter’s original score, expect pulsating, tribal rhythms to set the pace for a frenetic display of tightly choreographed mayhem on the Manchester stage. 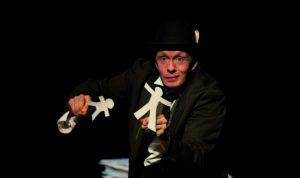 Fresh from a five-star run at the Edinburgh Fringe, bloominauschwitz comes to Manchester Jewish Museum on 15th November as part of its Festival of Leaving. James Joyce’s iconic everyman hero, Leopold Bloom, is unchained from the narrative of Ulysses. After a visit from his future self, he embarks on a quest to discover his Jewish roots in a heady mix of clownish antics and high drama. The script, a pastiche of Joyce’s dense, allusive stream of consciousness prose, asks what it means to belong by bringing Bloom face-to-face with the horrors of Shoah. 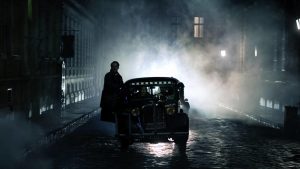 The 22nd annual UK Jewish Film Festival kicks off its first Manchester showing on the 10th November at Cineworld Didsbury with stylish crime-thriller, Budapest Noir. Nominated for the 2018 Best Screenplay Award, Éva Gárdos draws upon noir classics such as Chinatown in this reimagining of Budapest on the brink of the Second World War. Investigating the death of a Jewish woman, charismatic reporter Zsigmond dives into the capital’s underworld through its brothels and boxing rings to uncover the gangsters and corrupt politicians pushing the city to breaking point. 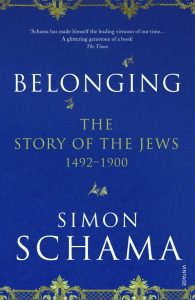 Historian Simon Schama’s second instalment in The Story of the Jews series is set for re-release in paperback form, having been commissioned as a BBC2 series and making it onto the shortlist for the Baillie Gifford prize for non-fiction. Four years after Finding the Words, Belonging charts the history of the Jewish people across the global landscape beginning in 1492 with the expulsion of the Sephardic Jews from Spain, right up to the 20th century. Rather than an overarching narrative, the book is rooted in personal stories, bringing colourful characters to life from the pages of unearthed memoirs.

Out now on paperback, published by Vintage Press.

Menorah and Manchester Reform Synagogue have come together to stage a thoughtful evening of lively debate at Elizabeth Gaskell’s House on 16th November, where Rabbi Robyn Ashworth-Steen and Rabbi Fabian Sborovsky will lead a group discussion on the topic of truth. Using a range of traditional Hebrew and modern texts, the session will explore its relevance in a current climate where the subject of truth is proving a particularly hot topic. Study materials are provided with no requirement to read Hebrew; all you need to bring is a thirst for knowledge. 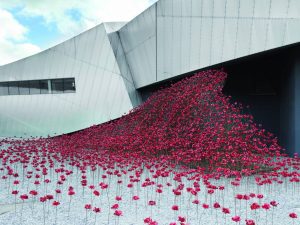 Wave sees thousands of handmade ceramic poppy heads suspended on towering stalks sweep up the corrugated steel flank of the Imperial War Museum North. The dramatic sculpture was designed in a collaborative effort between artist Paul Cummins and designer Tom Piper to mark the centenary of the First World War. Conceived in the autumn of 2014 as part of the UK 14-18 NOW arts programme, the installation has been seen by an excess of four million visitors across 16 locations. Running until 24th November, this is the last chance to see the arresting display as the programme comes to an end to coincide with the guns falling silent 100 years ago.