The Apprentice is back on our screens and among the candidates fighting for a £250,000 investment from Lord Sugar, is Charles Burns. Emma Steele spoke to the Manchester entrepreneur about fame, family and fortune.

At 24 years-old, Charles Burns is proof that age is nothing but a number when it comes to business and success. Showing entrepreneurial flair from an early age by selling sweets for a profit on the school bus, business is also in his blood.

His grandfather, Joel Burns, is the founder of Burns Jewellers Group, which he established in 1958. To this day, it remains a family-run business, with the jewel in the crown being its iconic Arthur Kays store on Manchester’s Market Street.

Having enjoyed a traditional Jewish wedding ceremony in Manchester last November, family is more important than ever to Charles. However, this close-knit bond was put to the test during the filming of The Apprentice. “I could only tell a handful of my closest friends and family that I was filming for the show. My cover story was that I was working on a consultancy contract in the USA!” explains Charles. 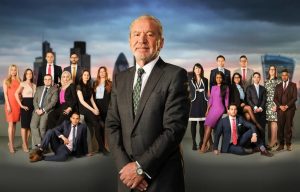 “Despite filming 12-18 hour days, and living away from home in London, I was allowed ten minutes a week to speak to my wife. The programme is a massive commitment and not a gimmick – Lord Sugar is offering a real-life investment – so you need to give it your all.”

Charles found himself in the firing line in the first episode but avoided being shown the door. “In the boardroom, I made sure that Lord Sugar knew exactly what I’d contributed to the task by ‘blowing my own trumpet’. When I was 18, working on the Tesco Management Scheme, my boss told me that I didn’t do this enough. He said if you don’t, no one will, which still resonates with me today.”

As filming for the show has finished, Charles must remain tight-lipped about the outcome but it’s fair to say that win or lose, he has still achieved a lot in 24 years. This includes being instrumental in bringing his family business back on track after a rocky period; taking the decision to step away and approach it as a management consultant.

“It came to light that the company needed a change of direction and I felt it was beneficial to view the business from the outside looking in. This allowed me to see clearly what needed to change and I’m proud to say that I’ve been able to help the family business recover,” says Charles.

As well as supporting Burns Jewellers Group and other businesses as a management consultant, Charles is a luxury watch trader – sourcing only the finest pieces for his clients. He bought his first Rolex in his early twenties as a result of his solid work ethic and loves what they embody. Even his Instagram feed contains a clever marketing ploy relating to time.

It’s this passion for watches and having previously helped his family business with cashflow problems that forms the basis of Charles’s business plan on The Apprentice. Without giving too much away, it’s an innovative idea which takes the demand for watches, the struggles faced by retailers to stock luxury pieces, and benefits struggling economies, retailers and customers.

Manchester born and bred, Charles is proud to live and work in his home city. “Manchester is a thriving place and has a great business community. Looking out of my office window, I can see the city being developed, and an influx of people visiting and working here. Many blue chip companies are relocating to Manchester as it’s a great place to do business.”

Citing the likes of Jeff Bezos, Elon Musk, Richard Branson and Mark Adlestone as inspirational businessmen who have revolutionised their industries, Charles states that you must have “drive, a steely determination, and the ability to overcome problems and find a solution” to be a successful entrepreneur. “You must also learn to manage your emotions,” he adds.

Charles might not be at the level of Richard Branson (yet) but thanks to The Apprentice, he is getting noticed. “It’s interesting to experience life in the public eye and I take the time to speak with fans as I accept that it is part and parcel of appearing on such a show. As for the ‘haters’, I find it’s best to kill them with kindness!”

So what does the future hold for Charles? In the short term, he plans on celebrating Chanukah with his family and friends, and preparing for an eventful December – the busiest time of year for jewellers. Longer term, he recognises that his priorities have changed now that’s he married and is looking forward to life as a successful entrepreneur and a family man.