Abi Silver, author of crime thriller The Pinocchio Brief, tells JLife’s Holly Thackeray all about her first novel, growing up in Leeds and her time in Israel.

Author Abi Silver speaks to JLife as autumn sneaks up on us, following a whirlwind summer in which she saw her first novel, The Pinocchio Brief, published by Lightning Books.

The Leeds-born novelist and lawyer, who grew up in Roundhay on Gledhow Lane, describes the experience of seeing her book brought to life as: “Fantastic and rather strange. You keep something in your head for a long time and then, suddenly, it’s sort of out there.”

Having been propelled into the spotlight, Abi adds: “The process itself has been much longer than I thought it would be. It’s not just the writing itself, you need to get involved with publicity. I don’t think I expected it.

“There are lots of crime writing organisations, festivals, magazines and bloggers. There’s this whole world that I have been introduced to, which is wonderful. But it’s also very competitive.”

The Pinocchio Brief follows the story of two lawyers, Judith and Constance, as they unravel the mysteries behind the brutal murder of a school teacher while defending the accused, a brilliant but troubled teenage boy. But, when new lie-detecting technology is introduced to the trial it threatens to reveal, not only the guilt or innocence of their client, but also secrets from Judith’s own past. 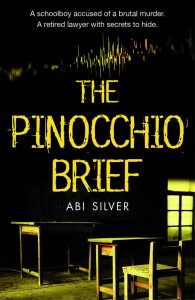 It may be dubbed as a ‘gripping courtroom thriller’ but, as with many of the novels on Lightning’s roster, it is a literary offering which comfortably straddles more than one genre, switching effortlessly between crime and law drama, while considering the looming spectre of technological advancements and the nature of truth.

Reach for the Sky

Care in the Community

“I set out to write the kind of book I might like to read,” explains Abi, who now resides in Hertfordshire with her husband, Daniel and three sons. “I wanted it to be entertaining and to have characters that people would like. Obviously with me having the legal background, the natural next step was to have it in my story.”

As a daughter of two former head teachers, Sidney and Jacqueline Fineberg, Abi, who was a pupil at all of Brodetsky Primary School, Morris Silman Middle School and Rounday High School, says it is “not surprising that my first novel was set in a school.”

“There used to be a TV drama called Crown Court – I thought this was the most amazing thing and I wanted to be a criminal barrister,” she says. “I had some fantastic teachers who helped me apply to Cambridge and I headed off there to read law at Girton College.”

Although her career path, which now sees her work as a legal consultant, and passion for the law have undoubtedly influenced and informed her writing, Abi points out that “as a lawyer I’m bound by confidentiality and I would never write specifically about identifiable people or cases. So I have to be a little bit careful, having the two things going on at the same time.”

When asked about how she came to pen her own novel, the Cambridge alumna highlights time spent living in Israel, between 2000 and 2004, as one of the catalysts for her development. “My husband was working for an oil and gas company and they suddenly made a find under the sea, off the coast of Israel. They asked my husband if he was willing to go out and open up an office,” outlines Abi. “I was on maternity leave and we thought if we were going to have an opportunity to go and live overseas, then this was a good time to do it. We upped sticks with about 15 suitcases.

“It [Israel] was full of turmoil politically,” continues Abi. “A lot of our friends wouldn’t come and visit us. I decided not to work because I had a young child and so that was the beginning of the writing process actually, because I was desperate not to let my brain turn off.

“We lived in a little town called Ra’anana. A really good friend of mine and her husband, both from Leeds, were living there and introduced us to a whole circle of friends – so there’s a little piece of Leeds in Ra’anana.”

Now writing a sequel to her debut novel, which she expects to have completed by next summer, Abi, a fan of the Sherlock Holmes stories, comments on how the characters, ideas and themes in The Pinocchio Brief were formed. “I really wanted to have a contrast between the two women – between the older and the younger, the technologically minded and the less so. I could pick up on those conflicts because those are things I can draw upon from my own work,” she says.

“When I read about this technology that already existed in The New Scientist magazine, it seemed perfect. There is actually a product which does look at the way people’s faces move and says if they are credible or not.”

Abi’s Pinocchio machine may not be so futuristic then, as she continues: “There is tremendous pressure on the criminal justice system in England to have a more streamlined process. Lots of routine tasks are starting to become computerised. There is a huge push to save money, so I had that in the back of my mind too. That gave me the idea that it might not be too far in the future when we have technology like this.” An ominous thought…

The Pinocchio Brief is available to buy now from Amazon.co.uk and major bookstores. Find out more about Abi’s work at Abisilver.co.uk.