LS17, placed in the top ten of the most valuable postcodes in the country according to Zoopla, has for a long while been a sought-after area to reside, and it’s easy to see why. From the suburbs of Alwoodley and Moortown to Shadwell and Harewood, there’s something for everyone whether living in or visiting the area.

One of the highlights of the summer is the Leeds International Concert Season, bringing live music to Leeds’ parks. Alwoodley Village Green will be the stage for local klezmer outfit, Kibitz, on 19th August. Kibitz is seven-piece instrumental band that performs energetic and soulful music inspired by traditional Eastern European and klezmer tunes, as well as taking influence from jazz, classical and folk music. This free concert is a chance to dig out your picnic basket and enjoy some traditional music in the sun.

Further al fresco activity can be enjoyed throughout the summer too. Film fans can relive three classic movies at one of Leeds’ jewels in its crown, Harewood House at the start of September. Luna Cinema, the country’s leading producer of open air cinema events, specialises in screening classic films in spectacular locations, and the grounds of Harewood are an ideal backdrop for Harry Potter and the Philosopher’s Stone (7th September), Pretty Woman (8th September) and this year’s surprise musical hit, The Greatest Showman (9th September). The house is also the setting for a musical production of children’s book, The Princess and the Giant by Folksy Theatre on 26th August. Folksy Theatre’s musical open-air adaptation based on the book by Caryl Hart and illustrated by Sarah Warburton, will be filled with music, puppetry, colourful characters and songs to have you clapping and singing along. Take along your food, folding chairs, friends and family.

The leafy suburb of Moortown has long been able to boast about it’s convenient position between Leeds city centre and nearby Harrogate, but thanks to the Harrogate Bus Company, known for its luxury features including Wi-Fi, leather seats, on-board announcements and even a library, has now announced it will be making stops throughout Moortown and Chapel Allerton, making getting to Leeds or Harrogate easier than ever. Perfect if you want to do your bit for Leeds City Council’s long-running campaign to promote clean air too!

Moortown’s charitable causes have also received official endorsement, thanks to the appointment of the new Lord Mayor. Graham Latty, who will the 125th mayor and takes over the role from Councillor Jane Dowson, has announced that he will be raising money and awareness for St Gemma’s Hospice, which cares for people with incurable illnesses at their homes and in its hospice on Harrogate Road.

In community news, Leeds Jewish Housing Association (LJHA) has announced that the High Moor Close estate, near to Moortown and neighbouring Shadwell, will receive an extensive refurbishment. Tenants of the flats, which were built in 1974, had expressed concern over the sale plans and many were unhappy about the prospect of moving. Replacement windows will be fitted later this year, while the kitchens and bathrooms will be replaced also. Mark Grandfield, new chief executive and interviewee in the last issue of JLife, commented: “It has always been important to me that homes are maintained to the highest quality and I fully endorse this decision.” 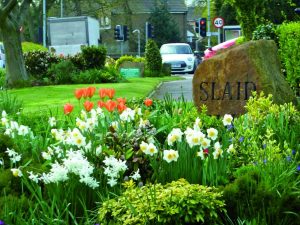 Slaid Hill in Bloom, a voluntary organisation working to maintain the communal flower displays and shrubberies for the benefit of local people and businesses in LS17, is currently looking for more volunteers to join its regular working group. If you have a flair for garden design and would like to help design and upkeep flowerbeds in your local area with fellow green-fingered residents, then this could be for you. Meeting at The Dexter on Wike Ridge Lane on the first Saturday of every month at 10am for two hours of gardening – duties include cutting the grass and watering the flowerbeds – the working group then head for an option lunch at The Dexter.

The highly successful Pesach pop-up shop which served the Leeds Jewish community for the first time this year, is now the subject of a documentary by Addictive Media, the corporate video producers based in Shadwell. Filmmakers Simon Marcus and Rebecca Teiger went behind the scenes of the pop-up shop to share the inside story of how Marshall Frieze and Simon Williams arranged for refrigeration, freezers and shelving to sell groceries and drinks at Etz Chaim synagogue. The documentary is available to view for free on Vimeo and has been shared on the Leeds Jewish community Facebook group.

There’s no place like The Zone during the summer holidays, and as always it’s a hive of activity for Leeds Jewish youth in LS17. Days of fun are lined up, with fun and laughter in store and an exciting programme of sports, creative activities and themed days. The programme includes a day of fitness and sporting development with coaches on 2nd and 6th August, a drama workshop on 1st August run by the Tonicha Lawrence Academy Theatre School, teaching a variety of drama techniques through various exercises and games, culminating in a production, and ‘Art Attack’ on 7th and 9th August to get them in touch with their creative talents.