Snir Shoshany was born into Israel’s oldest kibbutz, Degania, and has lived all his life among its banana trees on the banks of the River Jordan – “a huge plus for a place that reaches 45 degrees in the summer”, says Snir.

Yet despite growing up on the balmy southern shores of the Sea of Galilee, Snir prefers to travel among cooler climes. And coming to Leeds to embark on a two-year tenure as UJIA Shaliach – that’s just as well. As an emissary, Snir is tasked with representing Israel, combating negative opinions and encouraging the community to connect with their Jewish homeland.

“I’m sure the North Leeds community has a positive opinion of Israel, but if people hold negative views, it will be my pleasure to talk to them. People often see things as black and white, so I’ll try to show them the other side.

“For the last two years, I studied Political Science and International Relations at Tel Aviv University, so I look forward to sharing my experience and knowledge. I’ve been to the UK a couple of times before, visiting family in London. But I’d never been to Leeds, so this is a first for me.”

In a first for UJIA Shlichim, Snir has travelled with Kim, his partner of two years, who will join him in his role while continuing her university studies.

“Shaliachhood is important to Kim. Even though she’s not technically Shaliach, she’ll be by my side helping me reach out to the community. We did our research on the city and Jewish community here, and thought, ‘wow!’ this is an interesting place to be, so we were very happy we were chosen.”

The couple share a mutual love of travelling the globe and Leeds is their next big adventure: “Whether we’re on a road trip across the US or enjoying a picnic amid the wonderful nature in Israel, we’re always out exploring together. Kim jokes that everywhere we go, I always have a story from my time in the army.”

Snir’s familiarity with the geography of Israel comes from his years spent in military service. On returning from a year of service to the Jewish community of Milwaukee, Snir was selected for the Maglan Unit recruitment programme, considered one of IDF’s toughest, with a drop-out rate of over two-thirds. Very little is known about the elite IDF fighting unit, only that it performs high-risk classified operations behind enemy lines. Following 18 months of gruelling training, Snir was accepted.

“I’m not at liberty to disclose much, but I specialised in navigation. I spent a lot of time in the Gaza strip area. I have a brother who lives on a kibbutz on the border there. My missions involved rockets and missiles being shot towards Ashkelon, Ashdod and Tel Aviv. We had to find those people and deal with them. We always faced danger, but that was something we trained to be prepared for.” 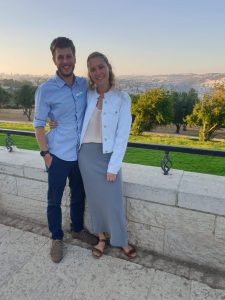 After finishing his compulsory three years of service, Snir has continued to engage in reserves duty, training others in the art of navigation, while still performing active operations. For Snir, one of four brothers, all of who served in the IDF, it’s a matter of giving part of himself back to the country that made him.

Raising the Roof with Andy Nyman

Carving Out a Niche

“I’m proud to serve in the army that my parents and grandparents served in. It’s something that everyone gives to the country, and if you can give more, then why not. It’s great to see my team, they’re my best friends, we forged strong bonds – we’ve all seen each other through good times and bad.”

Snir believes this collective sense of purpose is what fosters a sense of Israeli identity: “Your service really shapes who you are and gives you a chance to think about what you want to do when you grow up. In the States, I saw kids leaving school for college, having to immediately decide what they wanted to do for the rest of their lives. I think the army gave me the tools to tackle life and see things from a different perspective.

“As a young adult, it teaches you discipline, from putting on your uniform correctly, to waking up in the morning. But more importantly, it forces you to overcome challenges and think outside the box.”

This is just what Snir and his business partner, Yaniv Grinblat did, as they encapsulated the Israeli entrepreneurial spirit to establish their online travel business. Keen to make it easier for tourists to visit Israel after legislation inflated prices of Rav Kav travel cards for foreigners, TripNwize ships pre-paid cards to tourists at local prices.

“Asking how we can do something better, with less, is something we learn in military service, but translates well into business. Many young Israeli’s are encouraged to be independent and not be afraid of failure. At the age of 16, I was driving a tractor of huge cost to my kibbutz, carrying tonnes of bananas on the back worth a lot of money. It sounds stupid – but that’s the responsibility the kibbutz gave us at a young age.”

Despite his father hailing from a traditional Jewish household, Snir grew up secular in the kibbutz, but would still observe rites, lighting candles every Friday at Shabbat dinner and having a Bar Mitzvah. Yet he believes the connection to his homeland and Jewish identity transcends religious observance.

“Many Israelis are afraid of religion. Although I don’t attend synagogue in Israel, religious rituals are something that I appreciate and I’m very open minded about. I’m delighted to attend synagogues and wear a Kippur. I appreciate my Judaism and am connected in my own way.”

“My year in Milwaukee was the first time I saw how it was to be Jewish outside of Israel.

“In Israel, it’s easy to be Jewish, but outside, it’s not so easy all the time. That’s why you need to keep your Judaism strong here.”

Keeping Jewish identity strong among the youth is a priority for the 27 year-old during his time in Leeds: “I want to get in touch with young couples in their late twenties who have just left university. A group close to my age, I’m aware this demographic is less connected to the community, and myself and Kim hope to address this and bring them back into the fold.”

“Amir has done a really good job. There are some projects that we’re keeping running and ideas for new ones. We’ve got some fantastic events in the pipeline that I can’t mention yet, but all will be revealed.”

Looking forward to sharing their love of travel, Kim and Snir hope to encourage the community to experience the beauty of their homeland: “There’s so much to explore in Israel and that’s what I want to tell people. Kim and I can show you a different Israel, away from the usual tourist hotspots, where you can experience your homeland like a local – those are the best experiences.”

The couple are also looking forward to some good hiking closer to their new home, as the Yorkshire Dales beckon: “That’s what we love about Leeds, you can drive 10 minutes outside the city and you’re in beautiful countryside. We brought our walking boots and backpacks, and already armed with some great recommendations, we’re itching to get out there!”

Give Us a Boost