Due to the coronvirus pandemic, events may have been postponed or cancelled and businesses may be closed. Please check with the organisers for accurate listings and open times.

Ever desirable, Chapel Allerton remains the place to be.

With average house prices around £182,700, 62% lower than the capital, Leeds is proving attractive to first-time buyers, families and renters alike, especially the outskirts of the West Yorkshire metropolitan. Trendy suburbs like Chapel Allerton – which is commutable to town but very much has it’s own community spirit – reached the lofty heights of The Sunday Times’ ‘Best Places to Live’ list in 2018, and has been cited as one of many North Leeds hangouts tempting young professionals and families away from the bright lights of London.

Seven Arts, the area’s premier arts venue is leading the way in lining up regular cultural events, including one of the best drummers on the jazz music scene, Ari Hoenig. Ari and his travelling trio will be arriving at Seven Arts on 14th May, delivering sharp, streetwise modern bops that borrow as much from drum ‘n’ bass as much as they do from the jazz standards that inspired him. Known for playing with some of the best Israeli musicians from his base in New York City, you’ll get musical whiplash listening to his rhythms of every variety. If the folky fusion of klezmer is more to your taste, then Chapel A provides. Fusing Balkan and North African sounds with jazz, funk and more; a whirlwind of klezmer clarinet, skanking guitar and heavy brass, Leeds band Tshok will be impossible not to dance to on 5th June.

The venue is also home to regular film screenings and noted Israeli 2017 flick Foxtrot on 6th April is one of the most celebrated films on the international festival circuit. A bold vision of warfare, it asks us to look more deeply at the devastation of life within and out of the IDF, starring Lior Ashkenazi.

Up the road, The Woods bar, which re-opened in May 2019 after a year-long closure following a kitchen fire, has re-invented itself, this time as a daytime workspace called Woodwork, perfect for young professionals and freelancers. The Woodwork space has over 80 plug sockets, call-friendly acoustic areas, a communal printer and a meeting room with capacity for 50 delegates. It caused a furore late last year after announcing that it would be a childfree zone through the day to allow co-workers some peace and quiet while working, but at weekends and in the evenings, it remains family-friendly spot to sample some freshly baked pizzas.

The Three Hulats, the Wetherspoons pub which looms large on Harrogate Road, has been transformed after a £1.2 million refurbishment too. The pub is now much bigger, having extended into the former Fox’s nightclub (a local legend for those of a certain age) at the back of the building. Outside the beer garden has been upgraded too, with a canopy installed around the raised garden area with planters and shrubs. 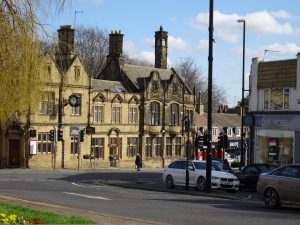 Local heritage brands such as Sukhothai, Aagrah, Ison Harrison, Stoneacre, Eyewear Opticians (under new ownership) and Edinburgh Bicycle Co-op have made Chapel Allerton their home, and joining them in the Chapel is Smart Gallery, formerly of Batley. Now a gallery across two floors at 123 Harrogate Road, the well-established art emporium continues to be home to original artwork, prints, design ware and sculpture from new and legendary artists.

For those who want to make their own masterpieces however, a variety of artful events take place at community space Inkwell Arts, including Creative Age, a free 12-week project open to people over 50. Artist Kevin Hickson introduces creative activities to maintain good wellbeing, such as painting, drawing and ceramics.

There’s been a concerted effort to promote the Leeds region with its vibrant food scene, abundance of cafés and great independents, professional services, friendly community and arty venues and festivals, it’s not surprising that Chapel Allerton is deemed to be perfect for family living or a visit from LS17-ers. 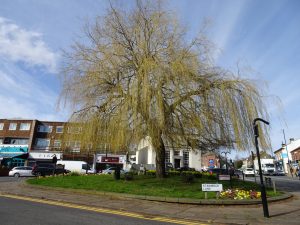