Fresh from taking part in the Purim celebrations at Sinai shul, JLife catches up with Becky Joyce, co-founder of Homeless Street Angels.

For the last six years, Becky Joyce, along with sister Shelley, have been feeding and clothing the homeless in Leeds city centre and surrounding areas. Co-founded with their late sister Abi, Homeless Street Angels (HSA) began life as a weekly outreach group, with volunteers walking the streets of Leeds to distribute warm meals and certain useful supplies to those living on the streets.

Since then, HSA has developed further services to meet demand, such as putting together food parcels for struggling families in Leeds and even helping to rehome individuals and assist them in finding work. As the need for assistance and intervention care continues and cuts to local services are keenly felt by those who need them most, HSA’s offering has widened, even stepping in to help those who are still waiting for their vital Universal Credit payments.

HSA now has a loyal group of volunteers that support Becky and Shelley each week, some as young as eight years old taking to the streets to help those without anywhere to sleep or means to eat. The outpour of support has been overwhelming, with spaces to join the weekly walking groups fully booked until July. The call now is for food and supplies to help fill their supply of food parcels that are distributed regularly to families who are struggling to make ends meet. 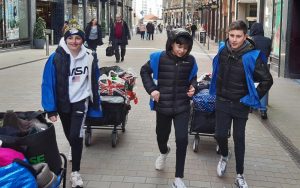 The city’s Jewish community has enthusiastically joined the cause too. After the success of last year’s Impact Care Awards scheme from Chabad Lubavitch Leeds, whereby young people assist in distributing meals to the homeless as part of their charitable learning, HSA once again joined forces with Rabbi Reuven Cohen this year, to offer volunteering opportunities to Jewish youth. “We always have been embraced by the Jewish community”, explains Becky, “my sisters and I went to Gateways School and many of our friends are Jewish too, so it’s all happened quite naturally. Street Lane Bakery has regularly donated bagels for the pre-prepared meals too.”

Give Us a Boost

It’s been all systems go since winning Volunteer of the Year at the 2019 Yorkshire Choice Awards and the One to Watch gong at this year’s Simply Ladies Awards, the accolades coming fresh off the back of Skopes adding the fledging charitable organisation to its roster of good causes, even helping Becky and Shelley source a job for Ryan, a local man who was homeless for four years.

Skopes, which has donated to charities annually for many years now, reportedly donates £150,000 per year to various charitable organisations including the Leeds Jewish Welfare Board and Yorkshire Air Ambulance. After being assigned a council flat, HSA furnished Ryan’s new home by donations and Skopes then gave Ryan a full-time permanent job in its Leeds warehouse on the Cross Green Trading Estate.

The Skopes team are continuing its support of several charities both regionally and nationwide. By providing financial support to these charities, it will be able to help deliver a number of new projects within the region to help improve the wellbeing of members of the community. Its 72 years since Skopes was established and its continued commitment to charity is an indication of how it is constantly evolving.

Donations and continual support from local businesses like Skopes and groups such as the West Yorkshire Masonic Lodge, which recently donated nearly £5,000 to the cause, keep this completely volunteer-ran scheme above water, and Becky is extremely passionate about reaching out to communities and business owners to encourage that support: “Having Skopes on board is fantastic. Each week we wonder if we’re going to be able to feed people the following week, so achieving charitable status and businesses like Skopes joining us really helps people get off the streets. We’ve funded a lot of this ourselves so having Skopes stepping in and helping the likes of Ryan is one of our first successes.” 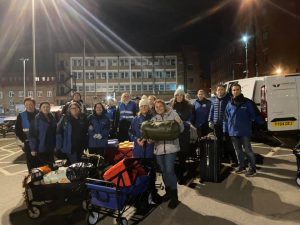 The next step for Homeless Street Angels is to create ‘Abi House’ a funded day centre, named after Becky and Shelley’s sister who passed away at the age of 39 in 2017. The centre will be for those who are looking to get back on their feet and will provide assistance in life, offering help with job applications, therapy, while a library and garden is proposed too. “We’ve been doing this for a few years now, we’re like family to those we help,” explained Becky, “We want this new day centre to feel like they’re coming home to family too.”

Further endorsement from the likes of local celeb and former BBC Look North presenter Christa Ackroyd is yet another step in the right direction. After meeting at the Yorkshire Choice Awards, Ackroyd agreed to become HSA’s team officials and will regularly help out with outreach as well as looking into how HSA can help prevent those who have recently left prison avoid ending up on the streets: “She’s got a real heart for it. All the members of our team have been brought together for a reason – we all have the same passion and the same ideas about what we want to achieve.”

The recent cross-communal Purim party at Sinai Synagogue was another opportunity to raise awareness of this essential cause (and dress up!), with children helping HSA to put together goodie bags for those in need for the following Thursday outreach session. Other local events, such as HSA’s recent ‘rucksack appeal’ involved the North Leeds community coming together to wrap gifts and toiletries to hand out to the homeless on Christmas Eve. The night before Christmas holds much significance as it was on that night six years ago that Becky first felt obligated to help the homeless while out donating items with her young daughters: “It was then that I saw how bad it was and it inspired me to get involved.

“We’re not a commissioned service. My sister and I set this up by ourselves by initially just going to the pound shop with our own money, and that’s what we did for months every week. It’s only by people seeing what we do that they have donated a fee or items for the food parcels that we’re still here. So many people have been so kind. I worry all the time that we’re not going to be able to carry on, but it’s due to people’s generosity that we have.”