Following the success of its first event, the organisers of The Great Bar & Bat Mitzvah Northern Showcase have announced another show in November.

Hayley Lawson and Laura Goldman, founders of The Great Bar & Bat Mitzvah Northern Showcase have announced the date of the next event.

After the success of the inaugural show at the Manchester Marriott Victoria & Albert Hotel in March, Hayley and Laura will put on The Great Simcha Northern Showcase at the Emirates Old Trafford, home of Lancashire County Cricket Club on 4th November, from 11am to 4pm, and will be once again teaming up with JLife Magazine as its media partner.

Looking back on the first showcase, Laura stated: “The show was a huge success and we had footfall of over 250 people throughout the day. Customers traveled from Leeds and Liverpool as well as Manchester. The feedback from the vendors has been very positive and the visitors were impressed with the goods and services exhibiting.

“It will be an even bigger and better showcase, at a spectacular venue, bringing together over 80 exhibitors for weddings, Bar and Bat Mitzvahs, corporate events and parties,” Laura continued. “We will also host a pop-up Chanukah fair allowing visitors to also shop for gifts. We will be offering the largest showcase in the North West for all things simcha.” 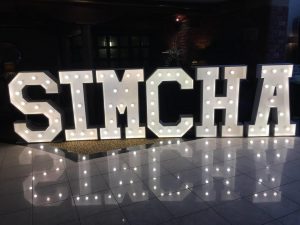