JLife speaks to Alwoodley’s own Jonathan Phillips, co-founder of Leeds-born houmous bar Humpit, to find out how a father-son team took a little slice of Israel and turned it into the UK’s largest vegan chain. 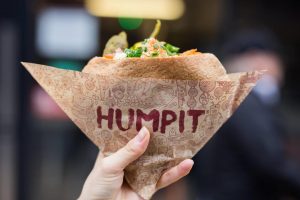 The emotive power of houmous across the Middle East can’t be overstated. A matter of fierce tribal rivalry, the battle for ownership of the humble chickpea dish has been a war long fought. Many believers in its Jewish origins go as far back as 3,500BC to quote the Book of Ruth, part of the third and final section of the Hebrew Bible: “Come hither, and eat of the bread, and dip thy morsel in the hometz.”

At its most simple, the dip combines chickpeas, tahini, garlic and lemon, but countless variations have evolved, ingredients changing with the geography of the region. Whether Jewish or Arabic, for Israel, houmous is a national obsession. Houmous bars, known as hummusia, are much like the English chippy. Lining every street corner, they open from daybreak until the day’s supply runs out, feeding the nation’s houmous lovers pounding the pavements, stuffed pittas in hand dripping hot sauce down their front.

Jonathan Phillips’ parents made aaliyah when he was six months old. Having grown up in the town of Kfar Vradim, 10 miles from the Lebanese border, the 29 year-old’s defining experience of middle eastern fare was a joyous mixture of cultures: “It was a great growing up around Arab villages surrounded by protected forests, running through street markets packed with fresh ingredients. I used to pick up fresh pittas every day for school and it was just fantastic.” 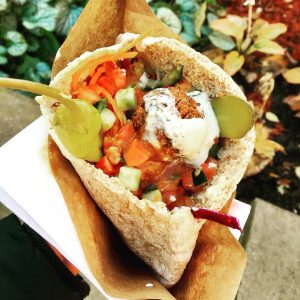 Matt Healy: King in The North

When he was 12, the family returned to the UK and settled in Alwoodley, with Jonathan attending Allerton High School: “I was thrown in at the deep end moving from a small village to the what felt like a huge city. Hebrew was my first language, so it was quite challenging, but I managed to learn English quickly to fit in at school.”

Fast forward to 2014, and now a graduate surveyor fresh out of university, knockbacks from London firms led Jonathan to feel “fed up of the corporate world”. That year, the UK houmous market was worth £375 million among the big four supermarkets alone. Wanting to tear off a slice of the action, Jonathan teamed up with his father Simon to open their first Humpit branch in Leeds Corn Exchange.

Tapping into his dad’s experience in the food manufacturing industry, Jonathan wanted to recreate his childhood memories of a traditional Israeli street food experience: “A pizza in a supermarket is a completely different product to what you’d get in a restaurant. It’s the same with houmous. We wanted to give people a taste of what fresh houmous is like and experience the traditional way of eating it from the bowl with falafel on top and pitta on the side, topped with loads of olive oil, paprika and parsley. If you ask any of the hummusia how to eat it, they’ll say: ‘lenagev!’. That’s the action – you rip the pitta and mop up the houmous. “ 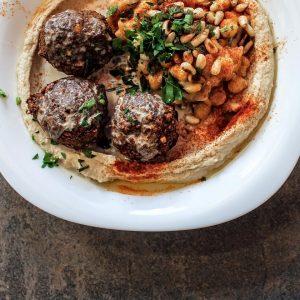 “A classic Israeli recipe, our houmous is smoother than the stuff you’d typically buy here. We don’t believe in wastage, so we whip it up fresh with enough for a day, but if it’s a busy one, much like the hummusias, when it’s gone it’s gone!”

After toying with various names, the pair settled on the risqué portmanteau of houmous and pitta: “Obviously, we get a few people that raise an eyebrow, but we very much appeal to the younger crowd. We like to say we have a fairly offensive name, but fairly inoffensive food!”

The Phillips’ established Humpit as a vegetarian business purely for ease, unaware of the vegan revolution that would hit the street food market in years to come. “When we opened the doors, one of our first customers was a big vegan blogger and they asked if we were vegan. Me and my dad looked at each other – we didn’t really know. So we checked it out and it turned out everything was 100% vegan, so she came back and wrote a nice blog about us and it just sparked with the community from there.”

Though Jonathan admits Humpit’s success is in part down to having “hit a great market at a great time”, not everything has come easy for the father-son duo: “The current state of the retail sector is diabolical, so our survival is down to a lot of luck and hard work. But if we’d have set up a burger joint, we’d probably have closed our doors already.”

In little over five years, the brand has grown to 13 sites nationwide to become the UK’s largest vegan chain. With recent venture capitalist investment and the introduction of franchising opportunities, the number of stores is set to rocket to over 30 in the coming years: “We’re looking to hit the London market and open our largest-ever store in Manchester city centre. We’ve even kitted out a shipping container for our most recent venture in Thorpe Park in Leeds. It’s very much a pop-up site, but it looks excellent and if people like us (and we behave ourselves!) we’ll soon have a proper spot there.”

When asked what it’s like to work so closely with his father, Jonathan replies: “My dad is opposite me right now, so I’d better lie – I’m kidding! We make a great team and let each other do our thing. I take care of the day-to-day running of the stores, social media and marketing, and Dad looks after the bigger picture. Sure, we’ve had disagreements, but we’re not driving each other mad just yet!”