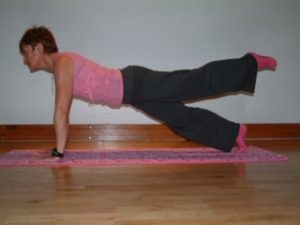 Those of us without a garden, work, a key workers job or an excuse to leave the home in these past few months will surely have felt more than a touch of claustrophobia. Some of us have baked, sung, or read away the time, others, unable to do fitness with Joe, have preferred to try yoga or Pilates to keep them fit.
Marion Rubins is one of the lucky people who have not merely survived but thrived under lockdown. The only Jewish girl in school who played tennis and netball, she was always driven by the rush of competition. Fond of squash, windsurfing and triathlon, she nonetheless made her first career as a medical representative for Johnson & Johnson, with whom she stayed for 15 years.
She then joined Verigen, a company supplying dressings for cartilage transplantation, which brought her into contact with both surgeons and physiotherapists. This deepened her interest in the therapeutic aspects of exercise, including Iyengar yoga, a precision form of the art which she had by then been practicing for many years.
Between 2006 and 2010 Marion transferred her interests to teaching, first as a personal trainer, then as a Pilates instructor: “I would have liked to qualify as an Iyengar yoga teacher, but this would have taken around seven years, and at the time it was too much to contemplate.”
In retrospect that may have been wise as three years later Marion sustained life-threatening injuries while windsurfing. Shattering her shoulder and injuring all the related tendons, she was in danger of never working again: “I never thought of the seriousness of the accident, though. At the time I only thought of how I was going to get better and set myself goals as when I was going to work again.” she said.
“It was a shock, but I am never daunted, only challenged. I had the discipline to do the rehabilitation exercises because I wanted to return to teaching. It has had the advantage of helping me understand people whose bodies do not always work as they want them to, and during this lockdown period I have more able to help them to adapt exercises to their needs.
“When it all hit, I applied much of my energy to adapting part of my home as a studio. I have used all the available platforms so as not to let down regulars who rely on my teaching.”
“I have managed to keep up the two sessions I do for those less fit. One is a Sport England chair-based class for Orthodox women over 50. It is held at Beenstock Home in Broughton Park and has been going for more than a year now. Another is called Chatty Exercise, which runs in Salford for those with poor physical and mental health. I am currently doing that via Zoom.
Marion concludes: “If you have little space, then go barefoot round the house, work your toes and feet or join one of my basic classes. If you can get outside, walk regularly and briskly and you will undoubtedly benefit. If you are interested in more lessons you can find them on my Facebook page ‘Keeping Sane in Lockdown’.”

Care Concern was planning to celebrate 40 years of service to the Manchester community, but, like so much else, it was cancelled due to the coronavirus. Elaine Bermitz recently spoke to one of its founding members.

In these uncertain times a small and quite remarkable organization, Care Concern, operates quietly within the League of Jewish Women. As a bereavement and loss counselling group, the nature of what they do is confidential, however they are easily reachable, being based at The Nicky Alliance Day Centre. Co-founder Eve Taylor gave me a brief introduction into how they began and how they work.
“40 years ago, a stalwart of the League, Lillian Simons, recalled being asked by an outreach social worker if she would train volunteers to support the parents of mentally challenged young adults. We were to be trained by a Nita Ruddock who continued in her supervisory role for a number of years. Lillian quickly realised while talking to one of these young women that they lacked much-needed emotional support. This young woman’s isolation and grief fired Lillian’s resolve to expand Care Concern’s service.”
On the initiative of another member, Sheila Gotleib, the service was expanded to serve the wider community. An enormous training programme followed as the service went from strength to strength. Other members underwent substantial training in disaster response, which led to another important role for the team, who were involved in training for the response to an emergency at a major traffic hub, such as the airport. The client base is now taken from the wider community of Greater Manchester, taking referrals from GP surgeries, social services and hospitals. There is also a waiting list, so sadly patients may wait up to two months to see a counsellor.
In recent times and under the influence of the current supervisor, who is also a counsellor Steve Witkin, they have embraced the technological age. They have gone mobile, have an automatic answering service and a volunteer telephone answerer, all of which have reduced the administrative burden on the volunteers, leaving them able to concentrate their expertise on their clients. Thus, they are undaunted by the coronavirus.
“The real heart of Care Concern is the counselling,” adds Eve, “we have at present 15 counsellors, two of whom are trainees and our free service is much in demand. As part of the League, we have charitable status and are very grateful for their help and support. Care Concern was even awarded the Queens Award for Voluntary Service (QAVS) for which the team received a special commendation.”
Charles Dickens wrote in Hard Times “there is a wisdom of the heart and a wisdom of the head” and in Care Concern there is definitely both.
Contact Care Concern on 0161 796 0807 if you need help during these uncertain times.

Life is for Living